LightBox Interactive and Sony Santa Monica Studios have released the follow up to the widely popular Warhawk. Starhawk is the game in question and brings with it new elements to explore and old elements to reacquaint yourself with. However does it live up to its predecessor? Read on to find out. 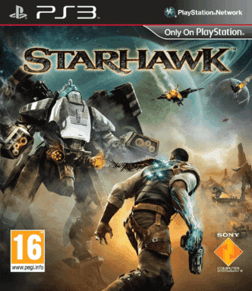 Starhawk’s main character is the tough and brooding Emmett, returning to the town he left many years ago. Set deep into the future, where rift energy is the most precious thing in the universe, Emmett and his brother Logan were rifters together, working on a rift mine. But when an Outcast war band or more commonly know as Scabs, came and destroyed their extractor it exposed the brothers to the rift energy they were mining. Being exposed to rift energy will usually change your very being to become an outcast and a scab, but their gear man, Cutter, modified Emmett’s body to help contain the rift energy and not turn fully to become an outcast. But he is still scarred with the rift energy and it is visible for all to see he is no longer human. It was from there that he left the town and became a hired gun, protecting other extractors and stopping incidents like his. But now Emmett has been recalled to the town he left and is back to help protect it.

The graphics in this game are very impressive. The terrain in the game is displayed very well, with a lot of long shots of mountains displayed throughout the game. Also the shots of outer space are portrayed really well. Character models fit the style of game and are not overly big or clunky. Destructible environments break realistically and the fantasy element of the game really allows for creativity with some elements of the visuals.

The sound in the game is as you would expect. The sound track compliments the game well and the sound effects are all very realistic. The best part about the sound is that you barely notice it. Which says more about it being natural and not standing out as a bad part of the game.

Starhawk’s core gameplay is very impressive, there are some very neat new features. The development team has really focused on what gamers will love. A great new feature is what they call “Build & Battle”. A fast paced way to build structures such as walls to protect extractors, towers to sniper scabs from, bunkers to restock weapons and even more. Simply hold down triangle and it brings up a circular menu. Use the analog stick to maneuver to the required structure and select it using X. All the structures are destructible as well, which makes for an interesting tactical battle in all modes. To build you need to have a full energy bar, and you can collect energy from enemies and from energy containers around the environments. This is a great way of restricting players from spamming the “Build & Battle” concept in online multiplayer mode.

Ground based gameplay is very simple, just shoot and slice. You have your weapons and your melee knife attack. The knife attacks will just slice at the scabs until they die or if you are in the right position it will turn in to a grapple attack and finish the scab in one hit. Shooting uses the auto aim mechanism which always helps gamers. But the real genius of the gameplay for Stawhawk is the Air battles. The chases, shooting and excitement draws you in and is quite simply fantastic. The ships in which you fly are aptly named Hawks. When trying to destroy your enemies you can lock on to their hawks and fire off rockets and a vast array of other weapons to destroy them. While you are locking on you can still shoot them with your secondary weapon inflicting damage while you have to wait! When you run out of ammunition, there are docking stations where you can restock and go destroy some more scabs. You can even land your Hawks on islands and battle on the ground from inside your spacecraft. This is an addictive part of the game and will quickly become a fan favorite.

It has been quite hard to spot any real flaws with the game. One thing that is not up to scratch however is the hand drawn cutscenes. While this may have been done for a specific reason, drawn cutscenes do not have the same feel and impact as a beautifully animated scene. This stops the game from reaching the cinematic point that turns a game into more than just a game but almost like an extended length film. But if this is the only fault that Starhawk throws at us we may be in luck. However saying that, the game does not bring enough innovation or have a deep enough story to topple the big titles in the genre.

Starhawk has what makes any game last over a long period of time, a extremely in depth online mode. 32 player battles are the pinnacle of this and are sure to satisfy fans of the original installment as well as newcomers to the series. On top of this, the game will take your through a great single player campaign mode. So once you finish the story you can make your way over to online and have a wealth of options to keep you playing for a very long time.

Needless to say, Starhawk is a fantastic game and a must buy for PlayStation 3 online gamers. It is easy to pick up and play as well, so for people who have never seen or played its predecessor Warhawk, it won’t require any prior knowledge. If space battles and destroying strange monsters sound like your cup of tea, you will love Starhawk. With multiplayer similar to Warhawk, Starhawk is a title to look out for whether you’re a fan of its predecessor or not.