It seems strange that even after a couple of years of Kinect being out for the Xbox 360, We gamers are still looking for its first hardcore game or at least something that actually works well with the Kinect sensor. From Software and Capcom have tried to achieve just that with Steel Battalion: Heavy Armor. Does it bring to an end the Kinect related disappointment, or is Steel Battalion: Heavy Armor yet another motion sensor failure? Read on to find out! 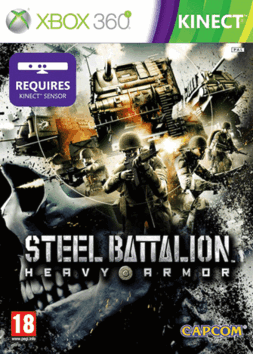 The story sees players take on the role of Sergeant Winfield Powers with his crew of fellow soldiers in an effort to fight a war against the United Nations who have taken over the world including players home country of the United States. You and your comrades control a two-legged tank (veet) in which you take down your enemies in the various missions that are given out by your commander. Once completing a mission, the story unfolds more one playersreceive letters from members of their platoon which lets players understand the back story a little bit more.  The story certainly has some depth to it and makes players feel like they are actually part of a World War setting and some, if not most of the story is also explained due to the lengthy chats Powers and his comrades have within the tank alone.

Graphically, this is certainly one of Kinect’s best offerings on the Xbox 360 and certainly matches up to the offering of what other hardcore games on the Xbox 360 offer. There are a variety of environments to explore whilst in the tank which all fit in perfectly of a World War setting. Using the tank’s main gun and heat missiles are a visual joy once and seeing your enemy being blown up after a hit of a missile can often be mistaken of actually being real.

The cut scenes which are in the game also offer some very strong visuals which will not disappoint gamers of both a casual and hardcore nature. The actual tank also is represented well and actually makes players feel like they are part of a war and that the whole mission is in your hands. The controls in the tank are laid out clearly and players have much freedom to do as they please inside the tank. Some parts of the game also require the player to look through their binoculars outside the tank and it seems not much, if any visual strength in the game is lost at all.

The sound in the game can be described as quite realistic. The conversations between your comrades and commanders are met with good voice acting and it is all believable and again, makes players feel like they are part of an actual World War. Missile and gun sounds are also very realistic and the way the tank moves and sounds in its movement across the game is very good.

You have already read how the story, graphics and sound are pretty decent. Now, how does it actually play? I hate to be the bearer of bad news, but I’m afraid that’s where the good news ends. In my general summary at the top of this review I asked if it would  end all our disappointment of Kinect. The answer to that question has to be a firm no. The reason,  the way the Kinect responds to and acts out in the game to the movements of the player is just plain awful and there are plenty of reasons why this is the case. Firstly, when players are starting a new mission, they are asked to ‘juice’ up the tank in order for it to move. This is done by pulling a lever on the right hand side of inside the tank in order to get it going.

Seems easy right? Well Kinect will often think that you are trying to do something different inside the tank and it will often take more than 2 or 3 attempts to do the thing that you are wanting to do. This easily lets the opposition have a distinct advantage over you and in some turns, kill you before you have even got past half way of the mission. The game have quite a lengthy tutorial mission at the start in order to get familiar with the controls and whilst when they are explained, seem quite easy, whether it be the hardware of the Kinect sensor or poor implementation of code makes the littlest task seem so much harder to achieve. The game takes on a new approach to the control system by having players stand and sit at different parts of the game. Players will sit to take control within the tank and stand up to go outside the top hatch of the tank in order to search out an enemy bunker. This is controlled by both the Kinect sensor and Xbox 360 controller and it must be said that if the game would of been controlled by just the controller, it would of been fantastic. The mission difficulty is of a very high standard and will force players into instant decisions in terms of aim and what the best approach is.

There are plenty of traps within each mission which include mines and missiles which are sent directly into your tank which can kill after a couple of hits. The tank can also get filled out with a smoke grenade which forces players to quickly press the button by pulling out a section in the top corner and pressing a button in order to clear out the smoke. Again, frustration with the Kinect sensor will show here as players will find themselves dying many times at the fault of not recognizing their actions off screen to match on screen. There are times in the game where you will be required to perform an action which include shooting an intruder but a lack of direction within the game make it quite impossible to understand what exactly you have to do.

Frustration alone, this title will certainly have you banging your head against a wall due to the lack of on-screen/off-screen interpretation and will certainly make you turn off the game at a very frequent rate. For those who can get past this, there is also an online co-op mode in which you can go through various missions which may or may not get you more angry of the game’s control quality.

For all the game’s bad points in terms of the control scheme and poor Kinect integration, Steel Battalion: Heavy Armor shows some early promise. As stated before, it would’ve been a much better game if it were just controlled via the pad. Whether From Software will introduce updates to improve the Kinect performance remains to be seen. In its current stated this one Kinect titles that will be remembered for all the wrong reasons. Sadly, Steel Battalion: Heavy Armor just isn’t the the hardcore Kinect game we were all waiting for.