Visual novels aren’t always at the forefront of most people’s gaming agenda, mainly because interaction is often limited, making the actual ‘gaming’ tag slightly questionable to them. That shouldn’t ever be the case, though. Especially with 5pb’s Steins Gate, that provides an interesting story and throws some occasional decision making in your direction, that once combined amounts to an engaging and well delivered experience all round.

It all starts in true oddball, anime fashion. A group of mildly eccentric teens, lead by main protagonist Rintaro Okabe, discover time travel and in turn the ability to send messages through it. That of course leads to the almost inevitable fables of consequence and altered time lines that you might expect from such a frequented topic. It’s not quite as cliche as you might expect, though. The anime cast sometimes slips into that pitfall, but the narrative rarely follows it down. 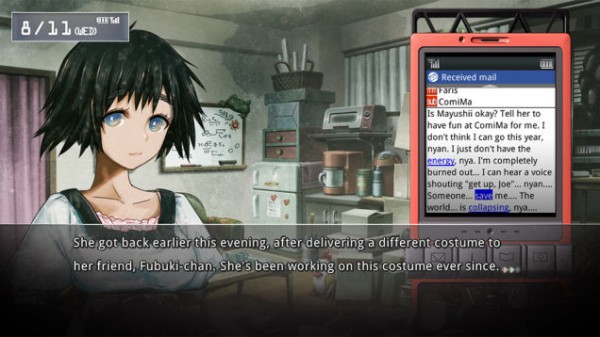 I will say, I found it a little tough going at first. You’re almost immediately dropped into action that feels underdeveloped and until you’ve really got an understanding of the characters and their motives, it can take a little while to really get into its stride. Protagonist Okabe, for example, narrates the story to you from a first person perspective and often comes across as slightly self-important and deluded. It’s not until later on you realise it’s an intentional, albeit exaggerated, portrayal of insecurity and self-defense that is aiding the character building rather than hindering it. Same could be said for the supporting cast, that at first glance might appear to be hitting every anime cliche under the sun, but eventually come into their own further down the line.

In terms of visuals, Steins Gate definitely looks the part. The text is clear and the dialogue progression is effortless on the Vita, and whilst the menus are a little small, you’ll be using them so little it seems unnecessary to dwell over it. I was actually surprised at how well backgrounds were utilised to help carry the plot. For instance, the simple things like zooming in and moving upwards with staircases if the narrative was suggesting it or even centering important visuals were completely on point throughout. Stein Gates electro-orchestral soundtrack was similarly well implemented, despite it’s placement seeming odd at times. A mild confrontation might be backed up with a pumping action sequence-like track, which ultimately dampened the genuinely tense moments to some degree. 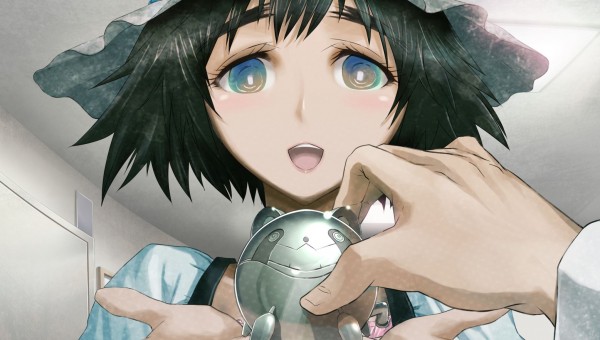 Interaction is handled via Rintaro’s mobile phone rather than straight up dialogue choices. It doesn’t happen that frequently but when you are presented with a decision to make it’s in the form of replying (or not) to emails and text messages. Those choices can affect the timeline and sequentially the outcome of the game’s ending – of which there are a few with one ‘true’ ending that you’ll have to work hard to get. It’s surprising how gripping the narrative becomes when your decisions have such a wide cause and effect; reply to a message one way and things could be very different the next time you play it through. You’ll want to play it through again, too, so as to retrieve all the missing story branches and to see how your decisions have affected the timeline – it’s genuinely intriguing.

It’s true that visual novels might not be every gamer’s partiality. However, for those that do like the genre, plus those who have thought of trying it, Steins Gate is one of the most accessible examples of it I’ve come across. Not only does it provide a stellar 15+ hour narrative (not including second play-throughs), but does it in a slickly presented package that feels like it was born for handheld consumption. Oh, and did I mention the PSN trophies? Now, if only we could get something shiny for every book we read.

And I know what you’re thinking – nope, I have no idea what the semi-colon is all about either.