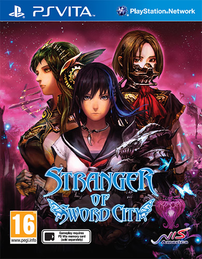 There is no doubt that the world of JRPGs is full of the most crazy stuff and stories that you’ll see in any other genre out there and it is the exact same here with Stranger of Sword City. The story sets around a plane crash that somehow sees you end up in a strange world known as Sword City, where people from Earth are known as ‘Strangers’. These strangers are equipped with special powers and you quickly find out that you are not the first to arrive. Strangers are given the task to collect the fallen crystals from the fallen enemies in order to stop the enemies getting stronger and causing havoc on Sword City.

Instead of being given a pre-determined character like most JRPGs, this gives you the chance at the start to determine how your character looks and what their special traits shall be.  There are a variety of different classes that you can choose from in the character creation point at the start, right from Knights and Warrior’s to more defense types such as Wizards and Rangers. Whilst different to the normal JRPGs I usually tend to go with such as Final Fantasy and the Tales of series, it was nice to be able to build my character to the specifics which I wanted.

One of the reasons I love the JRPG series is the way they look; right from the fantastic art style of the characters down to the wonderful, vibrant nature of the locations that you discover in your adventure. However, I cannot really say the visuals were of my taste in Stranger of Sword City. As you go through each labyrinth, you see the the map through a first-person perspective, with visuals that sort of remind me of proper old school JRPGs. Whilst they might appeal to some, I was left a little disappointed at the lack of variety on offer. However, the enemies and character designs do take on a more positive path, all designed (especially the enemies!) as crazy as the last! Those Japanese artists come up with some ideas!

It is the classes where you will want to focus on in Battle, as Stranger of Sword City allows you to have a party of 6 in a battle at one time. This battle party is made up from three at the front and three at the back. You are going to want to have your three strongest warrior, fighting types at the front to deal out the strongest attacks. I found it very useful to have at 2 of the back three party members at the back to be the more healing types, especially when you face off against the harder enemies later on in the game. Don’t worry if that sounds at all confusing; near the beginning you are handed an explanation of all the mechanics and battle techniques so you can quickly get to grasp with continuing on with your adventure.

Remember JRPGs that offered turn-based battles? Sounds like ages ago right? Thankfully, Stranger of Sword City offers just that and it is a decision that ultimately paid off for Experience Inc. The enemies and bosses you meet throughout the game do get hard, so be prepared to think strategically on what action you want each party member to perform. If you follow my earlier advice and always use at least 2 healers in your party, it will make your job a whole lot easier, that’s for sure.

Of course, with every JRPG and RPG for that matter, the bread and butter of the game is always the progression system (leveling up, if you like). Your equipment and stats are vital to how much progress you make through your game. It is OK being level 50, but if those stats and equipment aren’t improved on a steady basis, you’ll quickly find yourself disposed of easy in battles, and no one wants that! One of the main features in progressing through the game is by obtaining Blood Crystals. These blood crystals are often found when you defeat one of the bosses, known as the Lineage species. You can then swap those crystals for special abilities for one of your party members in order to make them much stronger in battle.

One of the more interesting features that I come across which I hadn’t really seen before in an JRPG is the ‘hide’ feature in battle. If your party has enough morale, you can set yourself to disappear and then ambush an enemy. Once you get into battle, the leader of the enemies will be marked with a crown, which if defeated, would drop a treasure chest that could contain some very vital stuff such as new equipment for your members. It was a feature that I found really useful throughout my time with the game, and one I’d like to see other games in the genre take on in the future

Whilst I didn’t love it, there is no doubt that Experience Inc have pulled out another solid JRPG to add to their long list of games. The battle system is solid and strategic and whilst the visual system wasn’t what I would of hoped, a lot of dungeon crawling fans may find it more appealing to them. If you are on the go or off on your holidays, Stranger of Sword City would be one I recommend.