Previously released in Japan, Tales of Graces f was received very well by both fans and critics. Trouble is, there are some great JRPGs out there, but some people are forced to import as they never get a European release. The trend ends here, as Namco Bandai has decided to bring Tales of Graces f to European shores. Has releasing it in Europe been worth it, or should they simply not have bothered? Read the review to find out. 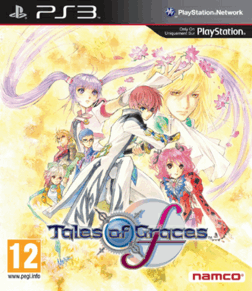 Behind every great JRPG there is a great story and, in this humble reviewer’s opinion, Tales of Graces f holds one of the best you’ll ever experience. The tale evolves superbly from start to finish, keeping you interested throughout. Don’t worry, the story isn’t going to be spoiled here for you, as you quite simply need to play the game yourself to understand its intricacies. Again, without going into spoiler territory, Tales of Graces f revolves around Asbel Lhant and his friends that go along with him on an epic journey, Betrayal, new friendships, love, anger and sadness all feature, and are portrayed superbly in this in depth story.

If you’re expecting amazingly realistic visuals, akin to something like Gears of War, then you might as well stop reading now. However, Tales of Graces f is stunning to look at in its own right thanks to the fantastic anime style visuals. As you progress through the game, you’ll discover and enjoy the visual delights of each town and dungeon. You’ll almost certainly find the meadow at Lhant Hill a stunning example of what anime style visuals can achieve on the current consoles. Even the characters in the game have their own unique, colourful style design, making them stand out from the crowd. 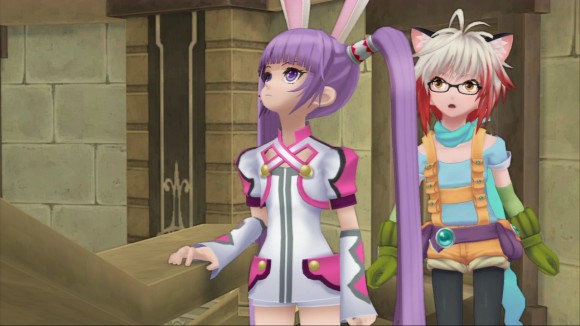 The sound in the game, more importantly the voice acting is also important to the core enjoyment of any JRPG, and whilst in Tales of Graces f it isn’t the best, it certainly does the job. For the most part, the voice acting is believable, but there are moments in the game where it doesn’t sound right. The same applies to the music too. There are some great musical pieces in the game, with the majority suiting the on-screen action, but some of the tunes can get a tad boring to listen to over and over again.  It’s certainly not the worst music and voice acting in a game, but each element definitely could’ve been a little bit better.

As far as JRPGs go, or any RPG for that matter, the gameplay is quite glorious. Tales of Graces f offers a deep and robust battle system that will make you actively search out battles rather than avoid them. As you go through the game, each character will earn ‘titles’ that will let him or her equip and master that title for up to five stars. Each star represents a different skill (or Artes) that the character can perform. Artes is simply another name for attacks, and there are A Artes attacks and B Artes attacks, with B being the more powerful. The frequency of the attacks depends on how much CC the Artes requires (think of it like MP in similar JRPGs). You can also choose exactly which character you want to control during a battle. Personally, your humble reviewer decided to stick with the original Asbel Lhant as his attacks were pretty useful throughout the game. 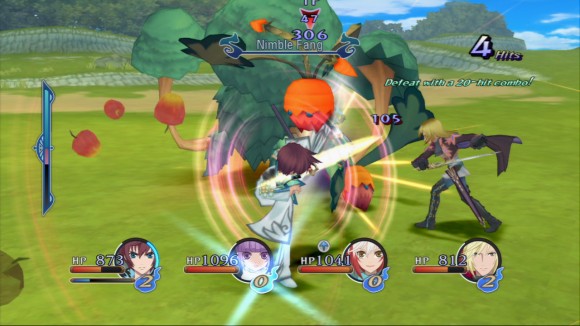 That said, the strategy you deploy for your other characters is crucial to how successful you are in boss battles throughout the game. You can choose if you want certain characters in the game to attack head on or be more defensive and help their fellow characters by casting healing spells when their HP is low. It’s very useful to have two of your stronger characters attacking full on whilst the other two (you can have 4 characters in battle at once in battle) take care about of HP whilst occasionally getting involved in attacking. As you’d expect, characters will level up by taking down the various enemies that they fight along the way. In fact, the only real gripe with the gameplay relates to the sudden difficulty change that crops up occasionally.

As you make your way through the game, you’ll find the majority of enemies easy enough to defeat. You’ll think to yourself, “I’m totally ready for the next boss”. Wrong. Think again. For some strange reason, the boss difficulty goes up around ten notches, and you’ll find your entire party defeated in a matter of a few hits. Not to worry though, as Namco Bandai has introduced a mid-way difficulty change via the options menu. You can choose go down to easy to and make the bosses a bit more manageable, or bump it up to Hard (chaos or evil can also be unlocked) if you fancy an almost impossible challenge. As you’d expect, the game also offers the usual JRPG elements such as buying items and weapons to enhance your characters arsenal. You also have the ability to mix items up in order to create bigger and stronger items that you may find useful later in the game.

If you choose to tackle the main story then Tales of Graces f will last you around 40 hours, which is just about right for a RPG. That figure doesn’t include the countless number of side quests in the game, so if you aren’t satisfied after spending 40 hours with the story, there’s another 10 to 15 hours of gameplay on offer in Tales of Graces f.

Tales of Graces f is quite simply one of the best JRPGs available on any system at the moment. It’s a title that will engross you from start to finish, keeping you on the edge of your seat throughout. There are few niggles, but if you’re a fan of the genre, then this is definitely worth a purchase. As close to JRPG perfection as you’ll get.