Remember the GameCube? Yes? Cool. You might remember Tales of Symphonia then. Released 10 years ago, it’s back, but this time on the PlayStation 3. It brings with it the sequel on the same disc to create Tales of Symphonia Chronicles. Was it worth re-releasing? Read on to find out! 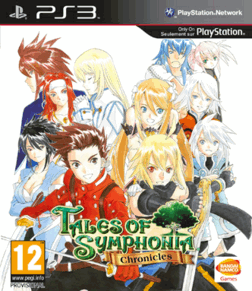 Tales of Symphonia is regarded as the Tales title that put the fantastic series on the map. I never got the chance to sample it 10 years ago, only reading on the Internet how highly the title is thought of.  Having experienced both games now, totaling over 70 hours, I have mixed feelings regarding the complete story.  Tales of Symphonia has a fantastic story, from start to finish, there are certainly no doubts about it. For those not in the know, Tales of Symphonia focuses on a young group who are on a mission to regenerate the world, a task that can only be completed by the one who has the ‘Chosen’ title. There are many twists and turns, with humour and serious elements mixed together fantastically, resulting in a memorable JRPG adventure. However, Dawn of the New World completely lets the package down, offering a lack of style and substance. The change of protagonist is irritating as he spends most of the game “soul-searching”. The main characters from the first game also not present that much, sadly only playing small parts. The Tales series is known for its fantastic story-telling, but unfortunately only one half of the bundle provides that here.

Tales of Symphonia was originally released on the GameCube, with the sequel being released on the Nintendo Wii so I was quite interested to see how Namco Bandai would cope with bringing it to the PlayStation 3.  I’ve got to be honest and say that I was hoping for a lot more visually, especially from Tales of Symphonia. Whilst HD polish has been added to the original GameCube offering, it’s plain to see that much of the game had been left as it was originally. Going through the world map can be quite a dull experience, with nothing more than blobs representing the battles that you partake in. Dungeons and cities have also been hardly touched which is a crying shame.

However, that’s not to say that the lick of HD hasn’t done anything for the game. Some of the cut scenes do stand out, looking vibrant, but that’s more of an exception rather than rule to be honest. The sequel does add a bit more polish to the package, but seeing as it was originally a Wii title anyway, you would kind of expect that. Towns you’ve visited in the first title are revisited in the sequel, with nice visuals along the way, but still quite a way off what I expected.

The sound, mostly the voice acting, is quite decent in both titles on offer in Tales of Symphonia Chronicles. However, there just isn’t enough of it. You’ll hear the characters talking in one scene, then have to wait an hour to hear some dialogue again. It would’ve been fantastic to hear all of the dialogue being spoken, especially the skits. One thing that did impress me regarding the sound is the spoken language choice. I urge anyone reading this review to choose the Japanese option. Obviously you won’t understand any of it (hence the subtitles), but it’s great to see that the option is there. It sounds great too.

Again, it’s a Tale of two stories with the gameplay as well, which is disappointing to say the least. Tales of Symphonia offers basically everything you need to create a really good JRPG, with the battle system being a particular highlight.  The battle system, which is real-time, offers you the ability to have your friends join you for some co-op action. It’s a small feature, but gives you that slight edge in battles, especially against bosses. Dawn of the New World should’ve built on that, but somehow manages to take the series backwards, with the battle system being slow and unsatisfying. That said, Tales of Symphonia only allows players to run back and forth, whereas Dawn of the New World provides you with a more open battle area. Both have their plus points and flaws (Dawn of the New World especially), but a combination of both battle systems would’ve worked perfectly.

There are so many JRPGs that offer out great stories, but unless you spend hours upon hours leveling up, you’re going to get no where. That’s one of the mains reason I enjoyed Tales of Symphonia so much. It offers you the chance to level up at the same pace as the story, not leaving you feel drained or bored at any point. The use of combo and unison attacks certainly keep battles from becoming stale, making you want to stay and battle that bit more to become stronger. It is certainly a system that works, combining with the usual gameplay features that are apparent in JRPGs very well. It’s a recipe for success, and Tales of Symphonia certainly cooks up an almost perfect meal.

If you’re looking for a JPRG that you can sink your teeth into, with hours upon hours of great gameplay, then Tales of Symphonia Chronicles is made for you. I spent over 70 hours all together in both games, but felt like I barely touched the surface. Potentially, there are over 100 hours here easy, especially with all the side quests on offer. If you can get past the many flaws the Dawn of the New World offers, and the brilliance that Tales of Symphonia brings, then you may as well lock yourself away as you’re not going anywhere for a while

Was Tales of Symphonia Chronicles worth bringing out? Well, yes and no. The fact that Tales of Symphonia is still brilliant even now merits the re-release. However, the bland and lifeless Dawn of the New World should of been left out. Many may decide to purchase Tales of Symphonia off the PSN store as a single title, but those looking for the ‘complete’ story should still pick this up.