It’s been a while since I took a break from my daily Hearthstone (thanks Aryel) and Counter-Strike: Global Offensive addiction to explore other gaming avenues. Like everything else in the world, my gaming interests seem to go through certain trends. Currently, I’m in a multiplayer state of mind, looking to (at the very least) venture out. What better way to do that than into dive head first into a series I know and love. Yes! Tales of… Zestiria. 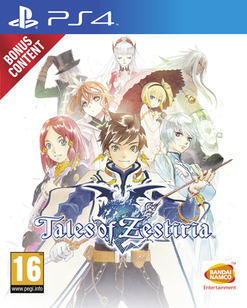 So let’s deal with the nonsensical stuff first. The Japanese seem to have made a big deal out of not being able to have a certain character in your party for very long. I’m here to tell you who cares? Are they a somewhat cool looking character? I guess. Do they bring anything to RPG storytelling you haven’t seen before? Not at all. So I’m not quite sure how this is relevant to the quality of the game. However, while we are on the topic of story, you should know that it seems to have impacted the party system a little, or maybe it’s the other way round? Answers on a postcard please.

Main protagonist Sorey is the sheppard. His job? To lead humanity to a brighter tomorrow by channeling the power of the spirits of the world. Spirits who at one point were worshiped and lived in harmony with humans. Each spirit or Seraphim comes with an elemental affinity to be used in the usual elemental rock paper scissors trope that rpg gaming has made its fallback tactic. This might be sounding a little familiar to you if your interests in any way align with mine. Yes, Sorey kind of sounds like The Avatar  (think more Korra’s story, than Aang’s). This affects gameplay due to the way Sorey interacts and uses the power of the Seraphim, requiring him to always be in the party to use one. Bear in mind that shepherds can only “equip” one Seraphim at a time. You can see how in the traditional four-man party system this might be a little restrictive for the ardent fan. This means that if you ever desire to have a full party, two of your members are already predetermined for you, because Seraphim cannot be party members on their own (sorry for the mini spoiler). On the plus side, the option for Japanese or English voices is always welcome. Let this be a lesson to you RPG makers, we always want this option. Even if your English voice acting is usually pretty good, like that of the Tales series.

Combat-wise at least at the basic level everything seems to be in check. Hidden Artes(specials) crush Martial Artes(standard combos), Martial Artes interrupt Seraphic Artes(spells). However the more in depth stuff has more in common with Tales of Graces than any other Tales game. This could be a good or bad thing depending on your Tales of affinity, but for the casual rpg nut I would say that there is more than enough tactical depth on display. In fact there are so many nuances to combos, gauges, blocking and the like, that there is not only an in game manual, but in-game tutorials that reward you for finding them. The flip-side being that unless you throw the game on hard like i did about 10 hours in, you can happily pound things in the face without worrying about the nuances. This is compounded by the the battle skills that can be unlocked for doing specific actions enough times, some of which turn the game into easy mode. In case you are wondering, battle skills in Tales games usually modify a standard action in the game. These are usually beneficial or detrimental based on the scenario they are used. However, the first ten or so are usually reserved for “auto” options that let the AI handle certain aspects of combat.

For those that get off on item collection, the fusion system is back, allowing you to mesh skills together for items of the same namesake. This essentially gives you free powerups by merging different skills together. Boosts to defense, elemental attacks, Arte defence, skill chain regen (your action meter), it’s all here. Those who master this will make hard mode look like a walk in the park (it’s a good job the Japanese love their new game+). There’s even a handly little skill table to help you learn the combinations, so you can seek out the gear you need for your fusions. There are 50 different equipment skill slots for you to play around with for each character, so it should keep you busy finding the right combination for you.

On the whole things aren’t looking too bad, but Zestiria has some weird problems that never seemed to sneak into the previous titles I played. First off, is the battle camera, which can be changed semi on the fly – Meaning you can pause and change its height and depth. Problem is, it never functions at any of these settings. The camera is abysmal when it comes to indoor environments and sometimes, even outside. So bad it makes 2006’s Sonic the Hedgehog look like Mario 64 and Galaxy had a love child. It commits every camera sin conceived, from being stuck behind walls to flipping behind scenery if you move in a fashion the game didn’t quite like. When your camera starts trying to killing you, you know you have a problem. Next up are the graphical problems. No big deal I hear you say, at it’s core it is essentially a PS3 game, but it struggles to consistently run at 30fps throughout. Enemies operating in the distance pop in as they do (we will never be rid of it it seems), but then proceed to animate at what could only be 12fps, while the rest of the game moves along at a leisurely pace. This may be a symptom of the quite large maps, but therein lies another problem. The fields are for the most part empty! The expansive array of side quests you expect from a Tales game are nowhere to be found. Instead, replaced with sub-quests that aren’t really sub-quests, as you WILL be doing these at some point to progress the story. It’s a strange state of affairs.

It’s hard not to feel like Tales of Zestiria is an incomplete game. Flawed even. When the camera behaves, it’s not terrible, but fails to reach the heights of Symphonia and Vesperia. Combat is the usual Tales affair, fun and as deep as you want it to be, despite lacking some of the Arte variation of previous games. The story and characters are decent too, despite Japanese fans being up in arms about the former. There is the option of the Alisha DLC which (unless I’m a noob) you unlock by going to the Bandai Namco website and following instructions. A strange decision with the existence of the PlayStation Store, but (rather fittingly) that’s Tales of Zestiria in a nutshell.