Telltale Games finally unleashed the final chapter of their take on Game of Thrones recently. With the main cast making more frequent cameos as time went on, did their tale of the Forrester family play an important part in the narrative of the show, or did the story meet a death as grisly as… Actually, better not. Spoilers. 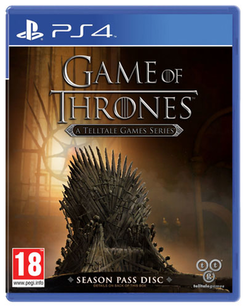 Let’s face it. If you’re reading this, you know what Game of Thrones is. To get a brief overview of the story, check out my review of Episode One. I mentioned at the end that I hoped they’d get the episodes out a bit quicker, but almost a full year later we’ve finally hit the finale. It’s a little disappointing given the likes of Life Is Strange has launched and finished well within the same timeframe, but Telltale have never been a studio beholden to strict release schedules!

Anyway, quibbles over the timing aside, Game of Thrones is actually pretty darn good. It certainly had it’s ‘mid-season wobble’, where it felt like it was starting to lose its way, but it’s clear there’s a lot of care gone into this side story of the Ironwood producing Forresters. Even if it feels at times like it’s ultimately a futile endeavour to be ploughing your time into. It’s not just because the narrative is so bleak (and really, it is), but also because I felt like I just didn’t care about the Forresters quite as much as I maybe should have.

The story continues to flit between Mia and Gared, with other family members coming to the fore as time goes on. The cameos, I’m pleased to say, definitely improve as the game progresses, with the voice acting warming up a bit from the somewhat stilted first episode. Ramsey Bolton is still the standout, with venom and hate oozing from the performance. Everyone’s favourite Night’s watchman Jon Snow turns in an admirable performance as well, with Kit Harrington providing just the right amount of urgency when needed, along with his laid back style of conversation as well.

The episodic game is something of a forte for Telltale, and with Game of Thrones, it serves to work in their favour for the most part. As mentioned above, the story starts to lag a bit in episode 3, but picks up again in the following outing. It’s a non-issue when the games are all available at once, but with the excruciating wait between episodes, I found it a bit of a pain to recall the events of the previous chapter, sometimes struggling to muster any enthusiasm for them at all. It’s a pitfall that they’ve encountered before, with each episode needing to have its own arc, as well as fitting into the overall narrative, and for the most part they stick the (King’s) landing. Episode 5 is where things really start to knit together, with Episode 6 wrapping things up in a typically Game of Thrones-y way. Let’s just say that if you have any reverence for the show, you’ll probably know what to expect with the game. In fact, mechanically, this is as much of a Game of Thrones story as it is a Telltale game. It’s almost by the numbers.

In the initial review of the first episode, I mentioned about the irritatingly prominent filter that seemed to bleed over from the background to the foreground with the graphical elements. Whilst still present in some areas, the vast majority of this is eliminated entirely from the game by the end of episode 3.

In truth, there isn’t much more that I can say from a technical point of view other than what was said in the piece about the first episode. The game continues to run fairly well, there are still a few hitches here and there, and from an art and audio standpoint, things stay the same, if not improve a bit throughout. It really comes down to how invested you are in the Game of Thrones lore, and allows for a hitherto unseen tale to be told. The content of the story? Well, I don’t want to give too much away, but if you like the show’s mix of intrigue, mystery, backstabbing and dragons, you’re in for a treat. Not so much on the boobs ‘n’ bums side of things, but given the way that’s primarily dealt with in most games, that’s no bad thing. Oh, and gore. Lots of gore. Telltale have showed that they’re not afraid to spill the red stuff with The Walking Dead, and just because they’re still using a cartoony art style, there’s no punches pulled with Game of Thrones.

All in all, Telltale’s Game of Thrones: Season 1 is an intriguing story of a small house in the north, loyal to the Starks, in the aftermath of one of the most shocking moments in the entirety of the Game of Thrones story. Telltale’s well-honed formula serves the story well, and the art style provides a welcome visual treat at times too. A fine blend of ups and downs sees the narrative canter at times, but occasionally start to struggle under its own complexity. Fortunately, it brings it all together in the end, although the typical question is raised of ‘just how much did *I* influence the story?’ at the end. Still, with my ending proving to be as fittingly grim as I’d expected, it’s left me looking forward to the recently confirmed Season 2, even though I’m still trying to figure out exactly why I’m bothered about the Forresters.