Swinging in the rain…

Your friendly neighborhood Spider-Man is back and slinging his way on to your consoles. The Amazing Spider-Man is the release to accompany the much anticipated film by the same name. However does it have what it takes to be more than just another game based on a film? Read on to find out. 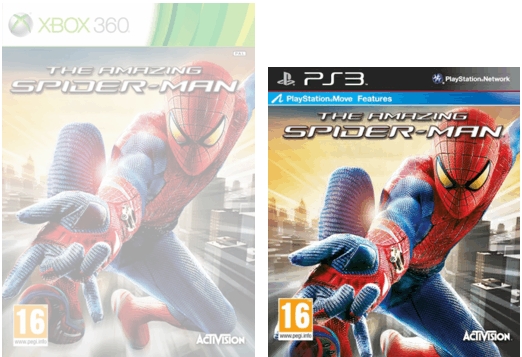 Normally with games based on films, the game will recreate the film, but The Amazing Spider-Man brings in a new twist and actually picks up where the film left off. Oscorp is rebuilding with the help of their new face, Dr Alistair Smythe, an expert in nanotechnology. Curt Conners aka The Lizard is safely locked up and Spider-Man is everyone’s favorite new hero. However, when Gwen Stacey takes Peter Parker on a tour of Oscorp, they soon discover that Conner’s work on cross species genetics was not stopped, as had been reported, but was being carried on at Oscorp. Parker’s presence disrupts the experiments and causes a chain reaction that see’s Gwen, Smythe and more infected with a virus that can cause them to become cross species after enough time has passed. Unfortunately for Spider-Man and the rest, Smythe’s Nanobots can recognise a cross species and attacks on sight. It is now up to Spider-Man to figure out how to stop this new breed of cross species, cure Gwen and defeat the Nanobots.

The environments are visually stunning. Beenox have done an amazing job in recreating a free flowing New York City. The environment feel like it’s alive, making it is a pleasure to explore. While at no point in the game do you see Peter Parker’s face, Spider-Man is portrayed beautifully & they have the costume down to a tee. The Nanobots are well shown, with plenty of details in the robots. Unfortunately the same can’t be said for character’s with real faces in the game. Gwen, Smythe and more all look normal, but not to the level we have seen in recent years. However, this doesn’t dampen the experience as it isn’t so horrendously bad it ruins the game.

The audio with in the game compliments the action and atmosphere of the missions. You have your typical superhero music playing whilst swinging from rooftops, action packed tracks for when you are fighting away enemies, which, cleverly, then fade away once you have beaten you final opponent to signal the end of the battle. The voiceovers are well done and easy to understand, overall a good job done with the sound.

The Amazing Spider-Man has some very neat tricks that keeps the gameplay very solid. A big boost for those who to love to travel by air is that web slinging is made incredibly easy. Just hold down the R2 button and watch Spidey fling him self around New York City. The unique thing about this is that Peter Parker will automatically perform beautiful flips and acrobatics in the air before shooting another web to swing you along to your destination. The combat system is very familiar to those who have played a certain other superhero game (will not mention any names). In fact a lot of the mechanics from Spider-Man seem to be similar this other games, however this isn’t a criticism. The combat system specifically is very good, it helps focus your attacks and favours you when you are putting together combos. This along with your famous “spidey senses” can help you put together a formidable attack. Of course attacking your opponents is as simple as a press of the Square button repeatedly. You also have other tricks you can pull out on your foes.

Holding R1 puts you in “Web Rush” mode, a slowed down reality giving you the option to sling your self at nearby enemies or interactive objects. Pressing O will allow you to Web your enemies. Webbing them up slows them down and can help overcome bosses as well as environmental challenges. There are of course other attacks and strengths that can be learned along the way through combat upgrades and tech upgrades. However, attack means nothing when you have gunmen scattered across the environment shooting at you. This is where a massive part of the game comes into play, stealth. You will find yourself trying to be stealthy a lot more than trying to beat enemies with melee attacks. When approaching your enemy from stealth mode, you will be given the option of a “silent take down”. Press R1 to perform the take down, which consists or creating a webbed cocoon and hanging them from the ceiling, wall or floor. This is the most effective form of attack when up against large amounts of enemies who are spread across the environment. A major help when using this technique is the use of the L1 button. Press L1 and you will shoot a web to a distant wall or ceiling and fling your self to safety when in a difficult spot. This helps you when you are spotted when trying to be stealthy, it brings you back out of your opponents eye sight and back to stealth mode.

One issue you may see with the gameplay is its general movement. It seems perhaps a bit too fast at times, but the further you go in to the game the more you see that if it wasn’t, you may not survive a lot of the levels. And of course the fact you have superhuman spider powers would perhaps make you a little faster then the average guy, right?

Unfortunately for Spider-Man, once you have finished the story and all of the side missions, that will more than likely draw an end to your time with the masked hero. Unless you enjoy just swinging around New York, you won’t find yourself much use for the game once it is finished. There are plenty of side missions to complete once the story is over but once they are done that is it really. There are no online facilities, although to be be fair, i’m not sure what online modes they could have feasibly added on to the game.

The Amazing Spider-Man is more than your average film movie-game crossover. It has an intelligent story, great graphics and mechanics that keeps the game’s theatricality in place. It may not live up to the standard of other games in its genre, but it’s still good game, worth playing through at least once so you can see what happens after the movie ends.