The Jak and Daxter Trilogy Review

HD collections are rather popular these days, giving you the chance to relive the classics with remastered visuals. Jak and Daxter is the latest series to get the HD treatment, with upgraded visuals backed up by smoother animations and PlayStation 3 trophies. Does the series still have the charm it did back on the PlayStation 2, or has it gone a bit stale? Read on to find out. 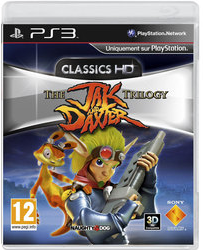 JAK AND DAXTER: THE PRECURSOR LEGACY

Fire up the original Jak and Daxter, and you’ll notice that whilst the graphics are quite polished, they’re still no where near the standard of current generation titles. Of course, with the original being released in late 2001 (over 10 years ago), it’s no surprise. Saying that, the game does look a lot smoother that it did over a decade ago. It’s difficult to judge the visuals in comparison to current day titles, as when Jak and Daxter was created, it never really intended to push the limits of PlayStation 2. The sharp visuals compliment the style of game perfectly, without ever looking ugly or pushing the PlayStation 3 to its limits.

Above all, Jak and Daxter allows you get to relive the start of a wonderful journey between two best friends, the latter of which is thrown in to an unfamiliar body courtesy of some dark eco. A host of tasks and challenges await you, as you try to transform Daxter back to his old self. Gameplay wise, Jak and Daxter keeps it simple. Face buttons are used to attack and jump, whilst the shoulder buttons perform more advanced moves. There’s nothing overly complicated about the game, and this makes it easy for players of all ages to jump in and get playing straight away.

The use of vehicles plays it part in the game too, adding a different dimension to the gameplay. You can, of course, collect blue matter to boost your attacks and speed, as well as use the power to unlock new areas of the game and use pads placed across the world. However, collect matter that’s not blue and you’ll be rewarded with different results. For instance, yellow matter will allow you to blast items and enemies alike.

If you’ve played Jak and Daxter on the PlayStation 2, then you’ll find yourself enjoying the title all over again thanks to this HD re-release. You’ll progress through a campaign consisting of some clever missions, earn power cells and power up machines until you reach the end.

It might not earn any awards for its amazingly deep plot, but Jak and Daxter is a fun platform game that will keep you entertained for hours. Charming, witty and lovable, the game takes it place in PlayStation 2 history, only now it’s back to take over your PlayStation 3.

Two years after Jak and Daxter hit stores, Naughty Dog came back with a sequel titled Jak II: Renegade. Thankfully, Daxter was dropped by name only and the talented developers delivered a second dose of the hilarious double act.

The sequel brought with it a few new abilities and even weapons were introduced, resulting in a significantly different playing experience, which also includes Jak’s ability to turn into a darker, more powerful version of himself. When not in his dark state, a morph gun is Jak’s favoured method of attack. You’ll encounter many different variations of the morph gun throughout the game, but no need to panic as melee attacks are still very much an option. Matter plays it part as well, but this time the dark matter doesn’t have the same effect on you as it did in the previous game. Vehicles are back too, with the sequel introducing the ability to switch between flying on the ground and higher in the sky. This adds some depth to the mechanic, allowing you to tackle more complicated tasks using vehicles.

The difference in visual quality is slightly more noticeable when compared to its HD predecessor and PlayStation 2 counterpart. Character models are smooth, backgrounds are less distorted and, as expected, the game is that little bit more pleasing thanks to the visual upgrade.

Sadly, the ability to gather Precursor Orbs is resigned to mere collectibles that unlock secrets. The reason for this is never explained, but thankfully they make a proper return in Jak 3. Apart from that and some new characters being introduced, the story follows a similar path to the original. If it’s not broken, then why fix it, right. Naughty Dog (more or less) stuck with the winning formula from the original and judging by the quality of the sequel, they most definitely made the right choice.

Much like the original, Jak II is a game you can jump into and play without much issue. If you haven’t played it the first game, you may get a little lost when it comes to the story, but that’s exactly why this collection features all three titles!

Last but by no means least, the HD collection is rounded off with Jak 3. Released only a year after its predecessor left off, Naughty Dog capitalised on the success of the first two titles in the series fairly quickly.

Whilst the story isn’t as good as the previous two games in the series, Jak 3 plays just as well and is without a doubt the best looking title of the lot, with the HD upgrade adding the visual appeal. The game kicks off with Jak getting banished to the wastelands for his “crimes” against the people of Haven City. He is, of course, not alone and this is where your journey begins. Once again, it doesn’t have the deepest of plots, but it never fails to amuse and get a chuckle or two out of you.

Jak 3 introduces a larger variety of weapons, with your arsenal expanding from 4 to 12. To add to that, Jak 3 also features many more vehicles, giving you more options to ride around in. These improvements add some much needed variety to proceedings and stop the game getting stale or boring. Jak 3 also introduces you to another side of the charismatic hero. To compliment his dark side that was introduced in Jak II, the third installment reveals Jak’s light side. Focusing on his defensive abilities, Jak’s light side is a nice addition, but doesn’t manage to be as fun the hero’s dark abilities.

Difficulty is a slight issue, with certain missions and timed challenges causing frustration due to them having no checkpoints. That minor negative aside, Jak 3 follows in the footsteps of its predecessors, delivering another enjoyable platforming experience.

The Jak & Daxter Trilogy is an incredibly fun platforming package that (if you’re anything like me) will take you back to simpler, more enjoyable times. Despite a few issues here and there, each title in the collection manages to be just as enjoyable as it was back on the PlayStation 2. It’s a must for fans of the series, whereas newcomers (no matter the age) will be in for a glorious platforming treat.