The King of Fighters XIV Review

You lucky, lucky obscure Japanese fighting game fans! Just as you’re getting done with Guilty Gear Xrd Revelator, along comes another slice of Eastern punchy madness to satiate your appetite! It’s only a new King of Fighters game! 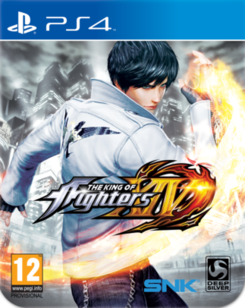 Originally launched to arcades in 1994, SNK’s series mashes together characters from their NeoGeo fighting games, Fatal Fury and Art of Fighting, alongside original characters. The hook here is that players pick a team of three characters rather than the usual one. Unlike Capcom’s later team based fighting games, SNK didn’t run on a tag-team format; instead, players order their roster before each fight and, instead of rounds, the battle ends when one side has been completely knocked out. This lends itself to a subtle strategy of trying to find the best balance on your team and put them out in the best order for the opposition you’re going up against.

The series initially ran on a pretty much annual basis, moving from arcade to home consoles up to King of Fighters XIII in 2010, but little has been seen of it since. The silence, however, has been broken in style with this years 14th iteration in the franchise. KOFXIV doesn’t reinvent the formula from the previous games; it’s still three on three action all the way. Single players can battle through a story mode, ten rounds of fighting capped with a battle against a somewhat cheap final boss – fairly standard fighting game fare. The “story” aspect comes from a series of pre-baked cutscenes and occasional dialogue branches pre-fight that change up depending on which characters are in your roster and who they are going up against. Other than the story mode, there is the usual couch VS (which can be played as a one on one fighting game if you’d prefer) and online VS modes, as well as artwork galleries which can be unlocked as you play and a fairly extensive training mode to help newbies learn the ropes. While it’s a solid package for a fighting game, it does feel a little light on the ground given the recent offerings from Guilty Gear and Neversofts’ Mortal Kombat and DC titles with their lashings of unlocks, challenge modes and extensive stories.

A big change for KOFXIV sees the series move fully from hand animated sprites to 3D characters. While it’s a shame that the gorgeous 2D from XIII has been done away with, the 3D models look great, retaining that familiar SNK art style and fluidity of movement. The character roster itself is also very substantial – 50 characters with 48 available from the start and 2 unlocked by completing the story mode. It does seem a little overwhelming but being able to choose three at a time will let players experiment with different combinations and the button combinations for special moves will all be familiar for fighting game veterans.

Indeed, familiarity seems to be the name of the game here; the fighting system itself is robust and straightforward with some guard breaks, dodges and counter attacks implemented intuitively and feels very much like an SNK game. There is a new system implemented in the form of a “Max” mode which allows players to perform unlimited super moves for a short space of time. With a range of moves to learn for each player, ranging from straightforward to complex, there is a decent amount of depth here for new and returning players.

If I could level one criticism at the game, it’s that it feels “safe”. The gameplay and visuals are solid, if nothing special; the roster is big and well balanced, if nothing spectacular. There is a lack of outlandish characters compared to, say, Tekken or the recently released Guilty Gear title. But it seems like a weak criticism as KOFXIV is, at the end of the day, a fun game for both solo or multiplayer.

Whether you like to play alone, online or, ideally, on a couch with a bunch of friends, King of Fighters XIV is a solid and fun experience. There are, admittedly, deeper fighting game experiences available including the frankly bonkers Guilty Gear Xrd Revelator and the more tournament focused Street Fighter V, but for some old school larks you can’t go too wrong with KOFXIV.