This War of Mine: The Little Ones Review

This War of Mine is strangely compelling, pulling you back day after day despite the unrelenting misery of the situations you find yourself in. Inspired by the real events of the Siege of Sarajevo during the Bosnian War in the nineteen-nineties, you know right off the bat that this is going to be a somewhat harrowing experience. What makes this very different from most wartime games, however, is that you play from the point of view of regular citizens who have been caught up in the conflict – not trained soldiers who are prepared for war.

Game: This War of Mine: The Little Ones
Developer: 11 Bit Studios
Publisher: Deep Silver
Reviewed on: 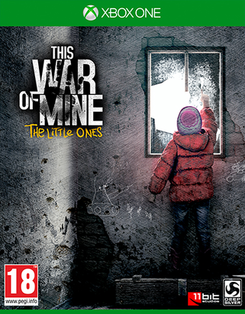 These citizens aren’t the only ones unprepared for what is to come, as 11 Bit Studios pretty much drop you in at the deep end and expect you to swim – or tread water at least – with no real tutorial to guide you. Starting off in a dilapidated ruin, you will take control of between two to four survivors, becoming entirely responsible for their health, hunger and mood. Scavenging resources and crafting useful items will form the basis of your day-to-day actions, as you guide your characters around their home in something that feels like a cross between The Sims meets Grave of The Fireflies.

Everything is split up into a day and night cycle, where you are confined to your shelter during the daytime – feeding yourself, healing wounds and improving your homestead – whilst the night-time allows you to leave the house and explore other locations dotted around the city, searching for more supplies. Time is very limited in both parts of the cycle, with the game never really allowing you to sit still and rest – there is always some need or situation to be taking care of, and by switching between the characters in your group, you can successfully manage your multi-tasking.

Beyond equipping your home with essential items such as beds, heating and, you can take a gamble on what upgrades you could spend the scarce and valuable wood and components you have managed to locate. Building a vegetable patch and trap could help you grow and catch your own food – becoming self-sufficient, but would that be for nought if you don’t reinforce your doors and windows, allowing raiders to break in at night and steal all of your hard-earned materials? The asset management side of the game is clever and engaging – fitting the setting of the game perfectly.

It is this constant feeling that any one choice you make could eliminate another option that could have been useful, that really ramps up the tension in the gameplay, and makes you second-guess every decision. It only gets worse during your night-time forays into the city. You could take a safe option, and head to the town square where citizens gather to barter and trade in peace – but with a heavy mark-up – or should you take a chance and head to the abandoned school building, where a band of military deserters have holed themselves up. If you choose the latter, you have to hope that your crudely-made knife, or pistol with only three bullets, can protect you against a band of outlaws who are just as desperate as you are.

Coming back from one of these trips with gunshot wounds means you have yourself a survivor who becomes more of a burden than a help, and you start to have dark thoughts about whether it would be better to forgo a whole night of collecting resources simply to take your wounded to the Hospital, or simply leave them to suffer whilst you serve the needs of the many. It is in these moral grey areas that This War of Mine is most affecting, challenging you to determine whether it is worse to leave your survivors close to death, or to steal the last remaining items of food from another survivor. Making things worse – some of your characters will be able to tolerate criminal activity, whereas others might fall into a depression that then affects everything they do.

Of course there is also the addition of the titular “Little Ones” – as the console-based re-release of This War of Mine adds children into the mix. This can take the form of parent-child pairs, or solo children who may become part of your group. The children are much more human than the other characters in-game – whereas the regular adults rarely speak – except to express their needs – the little ones play games, build toys and create imaginary situations to avoid dealing with the realities of the conflict. It is the direct juxtaposition of them to the adults – both striving for the same goal – the makes the addition of children so clever.

They can’t move heavy objects, or go scavenging outside of the shelter – so don’t contribute a great deal to the survival effort – but they do get unhappy far more quickly, and need constant attention from other people. If you didn’t feel like you ever had a spare moment before, expect even fewer once you have children to look after (just like real life). Although they don’t seem important for helping your group endure, the threat of them suffering and the emotions that brings to the surface is even greater. Protecting those who can’t protect themselves is both all the more challenging and eventually more rewarding.

It is the idea of making one human sacrifice, to allow for others to live becomes the central conceit of the game as items become scarce and violence rises. Re-playability stems from the idea that with better planning and an understanding of how the game systems work, will allow you to maybe protect even more of your survivors until the randomly-generated ceasefire day. There is thankfully an added story editor, which allows you to create your own group of survivors, locations and variables – making it harder or easier depending on your preference. For a game that is a constant struggle and has few truly fun moments, the option to make things simpler and more accessible is a welcome one. There are too many interesting ideas at play in This War of Mine for someone to abandon the experience simply because it was too hard.

Perhaps you will be prepared for all eventualities in your next play-through, or maybe the winter will be even harsher, maybe the bandits will come in greater number, or your most skilful housemate will come down with illness at a critical moment. The random nature of each play-through will mean that no two games are ever exactly the same, especially as the choices you make evolve your story as you go along. Trial and error will sometimes get you by, whereas other times it will leave you with two dead survivors and another bed-ridden. This is both annoying and compelling, meaning that you simply have to adapt, regardless of what you already know. I’m not sure if you could call the experience enjoyable, but This War of Mine: The Little Ones is certainly challenging and rewarding – if you manage to survive.