Lara Croft’s reboot gets a fresh coat of paint on the new consoles, with the release of Tomb Raider: Definitive Edition on the PS4 and Xbox One. With the original release gaining high praise, is it fair to class this as a worthy addition to the next gen library, or a desperate cash-grab? 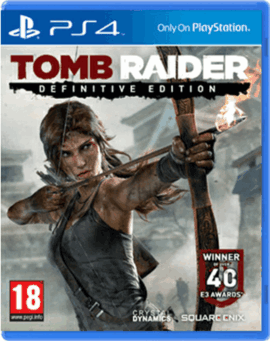 You can read our full review of the original Tomb Raider release here.

If you were one of the folks who picked up Tomb Raider last year, you’ll already know the gist of this review. Square Enix took the franchise, injected fresh live into something that was beginning to feel stale and crafted an excellent action-adventure for 2013.

If you’ve not Young Lara Croft and the team of the Endurance get caught up in a freak storm, stranding them on an island in the middle of the mysterious Devil’s Triangle. As Lara struggles to find the rest of her group, she also has to fight her way through a series of island natives, along with some supernatural beings thrown in for good measure. The story chugs along at a really nice pace, and the “loud, shooty” bits are offset by quieter moments throughout. At times, it feels like an Uncharted game in everything but its name, but given that Uncharted was once nicknamed “Tomb Raider with a dude”, that’s not the worst thing in the world.

Square Enix really did throw their all into making the reboot a success, and the important thing is that the game still holds up really well, which shouldn’t come as too much of a surprise given that it’s only been a year since release!

I played the PS4 version of the game. There have been a number of articles written this week comparing the PS4 and Xbox One versions, but I can only comment on what I’ve seen. And what I’ve seen looks absolutely stunning. Running at a smooth framerate that seems to 60 frames per second on a very regular basis, with vastly improved textures to the PS3/360 versions. It really is a visual treat, and if you’ve not seen the game running on a high end PC before, it’s almost scary how good it looks. Certain sections of the game are absolutely breathtaking, although with it being the exact same game, it’s quite difficult to conjure up genuine suspense if you’ve already gone through it before. The change to Lara’s appearance is quite jarring initially if you’ve already played the game, but it’s in no way a game changer. On the whole, the graphical improvements definitely feel like a breath of fresh air if you’ve been through the game before, and of course, TressFX is on display here, making Lara’s hair look substantially better than before.

The PS4 offers up a couple of nice touches as well as the obvious performance enhancements. Shared with the Xbox One version is the ability to tell your console to change weapons using voice commands. Sadly, as with most voice implementation, it seems exceptionally gimmicky and rather forced. Other touches include the Dual Shock 4’s speaker being used for audio logs and radio conversations, but by default these come through both the speaker and the main game audio. It’s a little disorientating at times, and I think it would work a lot better if they came through either one or the other. Another use of a DS4 feature that works surprisingly well is the subtle touch of the light bar, which flickers orange red and yellow when Lara’s got her torch out (oo-er!). It’s another gimmicky touch, but it’s subtle enough to not irritate.

The Definitive edition also comes with the DLC from the PS3 and Xbox 360 versions included on the disc. The bulk of this is multiplayer content, which sadly doesn’t improve the quality of this side of things, which is still quite throwaway.

The problem really arises when the question “Is it worth buying?” gets asked. On one hand, it is the best way to play this game on a console, but on the other hand, it is virtually identical in terms of content to the PS3 and Xbox 360 versions. For people who haven’t played Tomb Raider yet, and have either sold their previous generation consoles, it’s definitely worth buying. However, for those who have played the PS3/360 version, it would probably be worth holding off for a while. The absolute sweet spot for this game would be around £20, as you can pick up the ‘last gen’ versions for around half that, or indeed pick it up on the PC for a silly price now.

Tomb Raider: Definitive Edition takes what was an already excellent game and takes full advantage of the new console hardware to give it a more-than-modest performance boost. With many of the tricks and graphical improvements that have previously been exclusive to the PC, it arguably is “the definitive” way to play the game. However, as mentioned above, it gets hard to recommend paying full price for the game if you’ve already got a copy of last year’s release sat on a shelf. I feel that even the last-minute cuts down to £35/40 weren’t enough to recommend a ‘double dip’ with this edition, and given a few weeks it’ll probably be at a much more palatable price for most.

Having said that, it really is a great game. Yes, there are a few too many QTE’s, and yes, the biggest gripe about Lara going from a timid girl, crying over a deer to a stone cold killer, mowing down enemies is still there, but ultimately it’s held together by very strong gameplay mechanics and a story that’s as deep as it needs to be without going overboard. If you haven’t played Tomb Raider yet and own a PS4, it’s well worth picking up.