Activision roll out the Transformers license to Platinum Games, hoping that their stellar track record with character action games restores the faith that’s been lost through some less than stellar titles in recent history. How well do the minds behind Bayonetta and Metal Gear Rising pick up this classic franchise? 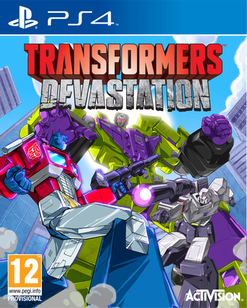 Let’s get this out of the way first. Last July, I reviewed the last Transformers game that was put out. It was, in no uncertain terms, an abomination. Terrible to look at, appalling to play, it left me feeling like Activision needed to give this license to someone who not only have the developmental chops to create something great, but also who care about the franchise. Fortunately, they’ve done exactly that. Platinum have stepped up to the plate and smashed it out of the park for the largest part.

From the get go, Devastation throws all of its cards on the table. It’s focused on the “G1” Transformers era. With an art style that mimics the classic TV show absolutely perfectly, Platinum have captured the essence of Saturday mornings of the 80s and 90s and distilled it perfectly into a blisteringly paced game that’s essentially their bread and butter. Every character is lovingly recreated in the 3D space, with the bold lines and solid colours rendered perfectly in the best cel-shading I’ve seen since the original Borderlands took up that mantle. Running at a stunning 1080p and a near rock-solid 60fps (there are a few minor dips toward the very end), Platinum have excelled in their second outing on the new consoles since last year’s disappointing Legend of Korra adaptation.

The game starts you off, naturally, as Optimus Prime. Megatron is hell-bent on recreating Cybertron on Earth (because of course he is), and it’s up to the Autobots to stop him (because, of course it is). Set in a fairly large city, chock full of hidden surprises, the game follows a fairly linear path over 7 chapters, with a few side missions laying about the path as well. Optimus, Bumblebee, Sideswipe, Wheeljack and the loveable but impossibly dumb Grimlock are all playable, and all of the characters have a unique set of unlockable moves. In the early going, the game gives you the chance to experiment with the individual characters, allowing you to decide whether to mix it up throughout the campaign or stick with one Autobot. There are trophies for completing the entire campaign as one character, which sounds daunting until you realise you can plough through the entire campaign in under 5 hours.

It’s the only real blight I could find in terms of the story as I was left wanting a bit more at the end, even though it wrapped itself up in a typically Transformers-esque way. It doesn’t let up at any stage either, as within 20 minutes I’d already dispatched Devastator for the first time and was well into a frenzied scrap with Megatron. It’s not afraid to bring out the big guns, and it’s all the better for it. Speaking of guns, there is a surprisingly adept crafting system baked into the game, with the ability to combine the abilities of some guns and melee weapons with each other, allowing you to mix and match attributes to suit your play style. There is also a neat little minigame which allows Wheeljack to create some enhancements to your character. If you time a button press right, it’ll create something great, if you miss it, it’ll turn out a little worse off. Either way, you’re given a nice little buff to carry around with you, all of which adds to the gameplay.

If you’ve played a Platinum game before, you’ll feel at home straight away with the gameplay and combat in Devastation. You hack, and slash, your way through fights using combos primarily achieved through different mixtures of the Square and Triangle buttons, dodging around enemy attacks with R1 and the directions. It fits surprisingly well with the Transformers license, as I must admit that I was sceptical going into it. I didn’t think Platinum would be able to force their fast paced melee combat into the titular hybrid machines without it feeling odd, but they’ve managed it superbly.

Combat is expertly pulled off, with a steep difficulty curve, requiring some pinpoint accurate timing with your dodges. Oh and when you do, it results in a brief window of slow motion (akin to Bayonetta’s “Witch Time”) to get in some crucial retaliatory strikes. Possibly the best part of the combat, however, is the satisfaction you get after pulling off a small combo and seeing a blue flash on screen. A quick tap of the R1 button and you instantly transform back into vehicle mode, before hurtling into the enemy to knock them off their feet, then back into robot mode and continuing your onslaught. It’s a fantastic mechanic and one that’s criminally never been implemented before. The one thing Platinum still haven’t quite got to grips 100% with is the camera, which is still a little frustrating in places, although I found this to mainly be during the traversal sections rather than when in combat.

Once you’ve gotten over the sheer insanity of the combat, you’ll continue to be hit with wave after wave of nostalgia. Within Devastation, there are no less than 5 original voice actors reprising their roles, with the likes of Optimus Prime, Bumblebee, Megatron, Sideswipe and others all hitting you right in the childhood. The music, as you’d expect, is also suitably frantic, with thundering bass drums and squealing metal guitars perforating the sounds of metal-on-metal action, it’s a joyous cacophony of madness. That’s not even mentioning the over-credits song, which is possibly the finest example of “game music done right” since Portal’s “Still Alive”.

I mentioned above that the campaign is around 5 hours. With no multiplayer to speak of (a potential missed opportunity, methinks), it’s clear to see why this has been targeted at the “budget” market (I say budget, it still launched at £40!). However, there are a total of 50 extra challenges in the Challenge mode, with a number of side missions dotted around the city as previously mentioned. If you want to get the get Platinum trophy, you’re going to have to sink a fair few hours into the game, even though it may get a bit repetitive toward the end. It’s a similar tale to that of Metal Gear Rising, truth be told, where you don’t get a huge amount, but what you do get is well worth playing. It did feel a little like the budget was being strained a bit towards the end, with some of the final cutscenes and battles feeling a tad recycled, but it’s a small gripe given that it’s just a huge amount of fun. It feels a bit like Activision are testing the waters with Transformers Devastation, and if that’s the case, I’m urging them to do more games like this with the license, as it’s a great example of a property done right.

I’m not going to lie, Transformers Devastation was so much fun that it might as well have tattooed a smile on my face. From the moment the 80s themed main menu appeared to the sustained wails of the guitar solos over the ending credits, I was grinning like a Cheshire Cat. A couple of niggles in the game stopped me scoring it higher (the camera frustrations and the length are the two key things for me), but at it’s core it’s a very impressive game. It looks like the TV show, it sounds like the TV show (albeit one relayed via a Kerrang compilation), and it plays like Platinum’s best. A fast paced, riotous action game that grabs hold of your nostalgia and refuses to let go until you’re done, it’s worthy of your time if you have even the slightest affinity for either these types of games or the Transformers license. It’s just a shame there isn’t more of it.

Wow… what a great post! I think it could also be useful for everyone to know how and where to fill a form online. I just filled out Vehicle Sales Agreement with an online software. It looked much better typed than hand-written. I used http://goo.gl/kB0v1C and it’s very easy to… Read more »