The sequel to Transformers: War for Cybertron has arrived! To Transformer fans the thought of Fall of Cybertron may seem heavenly. For the rest, a scent of caution clouds the air, like a thick miasma. This delicate situation was due in no small part to the repetitive nature of the new titles little brother, which left most gamers reaching boredom before the games conclusion. Regardless, High Moon Studios are aiming to lay these criticisms to rest and craft a game for hardcore Transformer fans and general gamers alike. Does it succeed? Or is it destined for a scrap heap on the planet Junkion? 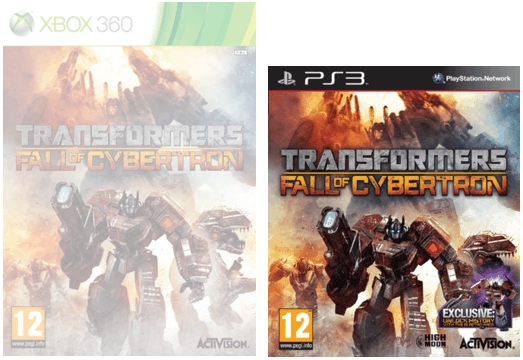 Fall of Cybertron’s story kicks off at the tail end of the Cybertronian war – A war the Autobots are destined to lose – While candidly filling in the blanks between the previous title and the imminent Autobot crash landing on our little blue planet. In an accurate reflection of  its little brother, Fall of Cybertron does an astonishing job of referencing the IDW comics and the beloved 1980’s comic series. It even manages to sneak in quite a few cheeky references to the 1986 animated film. Making it the Transformer fans proverbial wet dream, as it smacking you around the head with a sizable nostalgia club. To sum up, its, cheesy, over the top and full of bravado. Just the way it should be. Should you require anything else, then you have made a wrong turn somewhere and should leave this page immediately.

As you might have guessed, High Moon Studios are still using the amazing Unreal engine, and while the benefits of Unreal technology can not be denied, there are certain pitfalls that Fall of Cybertron suffers from. Yes you guessed it, pop ups! Textures, geometry, you name it, it will pop up on screen in that delayed manor only the Unreal engine could get away with.

From a design standpoint everything looks as it should, Every Transformer is instantly recognisable (unlike a certain trilogy of movies), whilst High Moon Studios stamp their own flair on proceedings. Unfortunately, due to the entire game being set almost entirely on a dying metal planet, you are not going to be getting away from piles of scrap metal any time soon despite the added scenic variation compared to Fall of Cybertron’s predecessor. So if you are the type to stand still for thirty minutes, point and spout the words “look at the pretty colours”, you might be a tad disappointed.

Being a Transformers fan myself, I find it hard not to ooze on my pad every time a cocky one liner is shouted from the 30 year back catalogue that is the Transformers lore. So you can imagine how chuffed I was when I realised the script and voice acting for Fall of Cybertron falls on the right side of awesome. Leaving me with a smile from ear to ear like an over botoxed cougar. Peter Cullen and Fred Tatasciore reprise their roles as Optimus Prime and Ratchet respectively and all is as it should be. Hell, even the famous voices of Troy Baker and Nolan North get in on the action.

Sound effects are all in keeping with what you would expect from a shooter based on a set of transforming robots. So you can expect the usual “pew pew” and laser sounds we have all come to expect from the franchise. Soundtrack wise you will find mostly original compositions, but the addition of Stan Bush’s “The Touch” will surely warm any Transformers fans heart. Although, I could have done without the remixed version that found its way into the end credits.

Let’s not beat around the bush here, at its heart Fall of Cybertron is still an action shooter and so for the most part you know exactly what you are getting – A good ol’ romp through Cybertron with plenty of things to shoot at.

The single player format for Fall of Cybertron is remarkably similar to its predecessor, whereby the campaign is split into two parts. Each section covers one faction (for those not in the know, that’s Autobot and Decepticon). Where it differs is in the execution of this format. Gone are the days where you are put in control of what was essentially the same robot, reskinned and renamed, thrown into a similarly reskinned generic level and expected to enjoy yourself. High Moon Studios have instead opted to personalise and tailor each section of the single player (of which there are 13) around each specific robots attributes. This leads to a frenzy of stealth, aerial and grapple crazy missions that are coated in the timeless Transformers charm.

Speaking of charm, little touches like adding a Teletran I docking station for weapon upgrades are welcome nods to the universe: And boy are there a lot of weapons and gadgets. The choice is refreshing and is something War for Cybertron was sorely lacking. Each weapon comes with a host of upgrades, that gives some relevance to the endless energon collection (released from everything you blast into oblivion). A slightly less relevant addition is the ability to rate items on a personal and communal level, the latter of which is pooled together and displayed to anyone playing the game and viewing that particular item. No doubt intended as a community building exercise, but something that will be completely dependant on the life-span of the game. That is in turn is tied to multiplayer, but more on that later.

A bit of freedom has also been injected into the mix, and while its not an open world game by any stretch of the imagination, there has been a better effort to move away from narrow corridors of War for Cybertron. However, these moments are still a little sparse for my liking; considering this is a Transformers game the emphasis should be on changing forms and being given room to do so. Don’t get me wrong, transforming in mid air to land  and drive off into the sunset is the equivalent of being six again and given free roam in a candy store. Problem is you are rarely given much incentive by the game to transform at all with the exception of the Combaticon levels (an elite squad of combat experts who combine to form Bruticus, a flamethrower toting behemoth). In the end, this kind of detracts from the push towards the more varied environments. A slight problem? Yes, but only if you lack the imagination of a 6 year old child, something we have in abundance here at NGB.

Love them or hate them, boss battles have taken a bit of a cutback this time around, but I can honestly say Fall of Cybertron gets by just fine with this design choice. Co-op however, might be missed by those gamers that love to thrash through games with a buddy. However, I can see how it might not make sense in the more character tailored design have gone for this time around.

Fear not though, as Escalation mode has made a welcome comeback – A mode which was arguably the best thing about the previous game. The premise is simple. Get  together with your friends (or randoms if you lack compatriots) and beat back waves of enemy robots, while progressively unlocking other sections of the level. You’ll then need to pool together your collected energon to unlock weapon and item hubs, providing the mode with that element of team play that everyone loves (at least we do). The well designed maps only add to the fun and unlike the singleplayer, provide plenty of incentives to use the alternate forms of the four classes available.

Competitive co-op on the other hand reads like a who’s who list of every successful multiplayer type in the past ten years. Load it up and you’ll be greeted with the pretty self explanatory Team Deathmatch, Conquest and Capture the Flag modes. Head Hunter mode is added to the list, which tasks you with collecting your enemies ‘Spark’ before you get the points for the kill. Of course, it’s not competitive multiplayer these days without some sort of unlock system (thanks Call of Duty) and so Fall of Cybertron adds its own spin on the age old xp system. With your xp, not only will you get a shiny new level number next to your name, you’ll also unlock custom parts you can use to deck out your chosen Transformer class. Unfortunately, customisation is pretty limited to a small number of parts by default (you can download more). All in all, this is a shame as it is one of the more intriguing aspects of multiplayer and without an extensive list of unlocks, i feel the lifespan of multiplayer is going to be on the short side.

Fall of Cybertron will take you around 8-10 hours to complete depending on whether you are searching for those elusive collectibles. Every level comes decked out with collectible audio recordings (Bioshock style) and blueprints that enable you to unlock certain weapons via the Teletraan I terminals scattered through the game. For those seeking more single player mayhem, there is also Dinobot DLC to be had. While multiplayer fiends will no doubt burn countless hours in Escalation mode.

After years of shoddy Transformer titles, High Moon Studios have turned the tide with not one, but two great titles based on sentient robots from another planet. While not packing the same punch, Fall of Cybertron improves upon its predecessor in almost all ways. Transformers fans will appreciate the game’s stronger narrative, while the rest will enjoy a solid shooter which is well worth a playthrough.