With four previous titles in the series under their belt, Redlynx have ever so slightly leaned towards broader horizons in the form of the futuristic motorbike racer, Trials Fusion. Whilst the core experience remains largely unchanged from the excellent Trials Evolution, are the small changes that have been made enough to warrant taking it out for yet another spin around the block? Read on to find out. 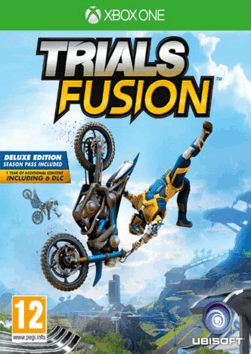 Every time a new Trials game is brought to our attention there’s always a twist that expands on the previous game. Trials Evolution brought changes that took the player out of the tight warehouses to fresh outdoor environments, for instance. And whilst Redlynx have continued the seemingly Trials-esque mantra of ‘if it ain’t broke, don’t fix it’ this time round, the body work shows a few scratches from the reluctant tinkering. Some of those imperfections work for the better and some a little worse, but all of them sit defiantly under the ostensible disclaimer of ‘Fusion’, that boldly sends us into the future to test our trialing patience.

The new look partners scenic outdoor locales with bright neon lights and polished metals as if they were fearful of leaning too much to one setting, so not to upset the other. The forests and deserts intertwined with sci-fi architecture and the odd space ship hovering in the distance actually works quite nicely and for the most part Fusion is a visual beauty. Unfortunately it is held back by frequent texture pop-in and the inevitable notion that it really is only a superficial change; it’s an updated canvas to ply a familiar trade, nothing more.

Trials Fusion is, of course, still stupendously addictive and rewarding as its predecessors. The clever use of physics, platforming and time trial racing come together particularly well and the balance striking between perseverance and frustration is quite expertly achieved. On the surface and to beginners it’s a fun timed-platformer that throws a few hurdles in the way; to the experienced player it’s a continuous struggle of leaning, braking and accelerating to reach a faultless run to finish line, and by doing so hitting those killer times to beat friends and gain achievements.

Career mode takes its chances with a storyline that might have been better served adorning the cutting room floor, along with an AI companion mocking you in the background that you’ll soon wish was down there too. The mode is also another part of the game that hasn’t really evolved a great deal, but that’s one thing you won’t mind because it retains the ability to dish out superbly designed tracks that test every ounce of your perseverance and skill. For all the hardcore leaderboard chasers and youtube’ers trying to shave fractions of seconds off from runs, the developers have not lost sight that this isn’t a game to be taken completely seriously, and that certainly works to Fusion’s advantage.

The skill game challenges are a great example of that arcade fun-factor. If you’re stuck trying to grab a gold run, you can try out challenges that might ask you to grab collectables, ride rockets or even bail off your bike and soar as far as possible through the air, flapping your arms like a complete loon – this is one of the more sensible skill games, too. These distractions actually became one of my favourite parts of Fusion, helping me separate myself from the tireless grind that the main game can become once invested.

The new elements are, in comparison, almost inconsequential to the overall feel of the game. Not because they have little impact, but because the premise remains so strong. One of these new elements is the big new feature, the trick system (insert diluted fanfare). It’s not essential to gameplay and you can get by for the most part without even indulging it. Holding the right stick whilst in-air pushes your rider into a number of different poses but the controls feel a little hit and miss and in truth, there’s very little reward to use it, especially when the original physics of leaning and placement are so much more enjoyable to experiment with as it stands.

Out of the main Career Mode you’ll find some local multiplayer that oddly feels a little sluggish compared to the single player and sees you racing against a few other races on the same screen. Online multiplayer and tournaments will be made available at a later date according to Redlynx, but were yet to be released at time of writing. The track editor also adds plenty of longevity to Fusion, despite being quite overwhelming to the uninitiated. Without much guidance on offer I struggled to grasp what seems to be a deep and plentiful editor, that no doubt can be very powerful to a more dedicated creative mind.

Trials Fusion remains an excellent game that’s still a lot of fun. Course design is highlight, as is the freshness of visuals despite the odd graphical glitch, that proves a lick of paint is sometimes all that’s needed when the core gameplay still has legs in it. It’s so very apparent that the team at Redlynx are caught in two minds on how far to venture from a winning formula when either way they run the risk of stagnation or alienation. This time they’ve got it about right, but come the next iteration they just might have to loosen the grip a little more than they’d like if they’re to appease the gaming public.