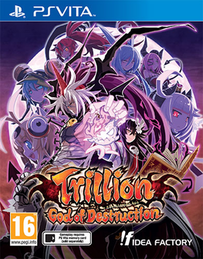 It’s difficult to know where to start with Trillion: God of Destruction. It bills itself as a tactical RPG, with a (stereo)typically Japanese art style. An almighty god (The titular God of Destruction) has come to wreak havoc on the Underworld, and your job is to stop him. The only downside? He has 1,000,000,000,000HP.

The game starts off with The Great Overlord Zeabolos, one of the main characters, rushing to fight the God of Destruction in an attempt to avenge his brother. Unfortunately, he succumbs to the overwhelming power of the God, and is brought back to life by a shady character, with the agreement that if he helps defeat the God (aptly named Trillion), then he will surrender his soul. Fortunately, Zeabolos has a number of Overlords at his disposal that can provide an offensive strategy against Trillion. Unfortunately, however, this is where things start to go downhill.

During the first hour and a half of Trillion, I must have encountered approximately 20 minutes, at best, of what I can describe as a game. The rest was filled with countless menus, and seemingly endless text-heavy cutscenes. Sadly, this set the tone for the rest of the game, and the abysmal first impression that the game makes never really shakes away from the hours that followed. Menu after menu, text scroll after text scroll, it’s not so much a game but more of a novel with a few smatterings of gameplay mixed in.

Throughout this entire period, I was sat thinking “The art in this game is really impressive”, and for the most part that carries through to the rest of the game. All of the stuff in the cut scenes are pretty impressive, but then the playable characters are introduced. It reads like a stereotypical Japanese list of female characters, and it’s absolutely horrendous. You’ve got: Girl with large boobs and red hair, girl with large boobs and blue hair, sleepy girl (with big boobs), shy and giggly girl obsessed with candy (probably under age but highly sexualised anyway), and a girl with boobs so large and exposed that you might as well just head on over to certain sections of the internet. Honestly, it’s just embarrassing. We should be moving past this as an industry. Maybe I just don’t “get it”, but if that’s the case I’m happy not to.

Anyway, once you’ve picked your unnecessarily sexualised protagonist, you ste off through a series of training Cycles. For you see, after his initial attack, Trillion is sleepy and needs to take a nap. During this time, you can train up your Overlord to gain more HP, more attack speed, any number of abilities. The problem is that it’s just, well, dull. You choose training, you choose the type of training you want to do, you hit X a couple of times as the same images come up on screen repeatedly, and then the numbers next to those attributes increase. It’s an irritating way to carry out the training, and once you find the menu option to stop the animations, it’s literally a case of hitting a button to see some numbers go up until you get to another text screen. There is also a training dungeon that’s available, and this is where you get to try out the battle mechanics.

Once you finally get to a gameplay segment, the game actually starts to make a bit of sense. If it’s in the training section mentioned above, you can start to get used to the combat mechanics, moving around a maze and attacking enemies. Sadly, the movement is a little clunky, with the camera being controlled by the shoulder buttons, and the 8-way movement being carried out with the D-pad. If you use the analogue stick, it opens up a menu to select a number of attacks and spells, which is a little disorientating at first. If you’ve gotten to the end of Trillion’s sleep cycle, however, you’re put into a battle with the multi-zeroed one himself. He’ll throw plenty of enemies at you before you even get close to him and start to eat away at his monstrous amount of HP. You’re offered the chance to retreat, but this will only work if your “affection level” with Zeabolos is high enough. The arena itself is an impressive place to showcase the fight mechanics, and the training battles against Mokujin are just as intense as your encounters with Trillion, but unfortunately the clunkiness of the controls and overwhelming number of menus doesn’t help it one bit. It’s a shame as it has the potential to be a pretty neat system.

Trillion: God of Destruction is a disappointing effort for a handheld game. Incredibly lengthy cut scenes interspersed with relatively short battles, clunky control systems and laughable hyper-sexualised characters ensure that a title with such promise never really gets past its initial confusion. The quality of the 2D artwork is fantastic, but the leap to 3D doesn’t quite work all of the time, and somehow feels lacking. A great idea that’s been sorely mistreated, with very little actual gameplay on display.