Cruising along the winding dusty road, the sight of the naturally sculpted red landscape akin to that of the grand canyon momentarily takes your breathe away. A neck breaking shunt from behind snaps you back to reality, and sending you tumbling into an unwelcoming outcropping of rock. Suitably peeved off with your rude interruption, you execute a sharp handbrake turn to confront the culprit, a banged up pest control van. Slamming your foot on the accelerator and simultaneously releasing a barrage of machine gun fire and missiles, time slows down as your opponent bursts into a burning husk. Satisfied with the outcome, you once again hit the open road, the smell of hot asphalt and burning flesh filling your nostrils. This is Twisted Metal, welcome. 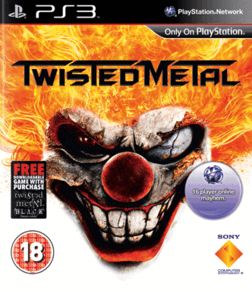 Those who are familiar with the Twisted Metal games will know they aren’t famous for their engrossing story lines, and the latest addition is no exception. Hardcore fans may be disappointed by the fact that the story no longer restricts you to a single driver/vehicle throughout.  This time the story is divided up into three parts, seeing the cover star clown Sweet Tooth, motorbiking Mr. Grimm and creepy Dollface making a return. Depending on the challenge you can pick any three vehicles from the wide range available, with the majority locked until the player completes a stage or achieves a Gold rating. I personally think this is a great decision by the development team, as I have many memories of frustration on getting stuck deep into the single player in previous Twisted Metal titles, with no way of swapping to a more fitting vehicle.

The cruel creator of the Twisted Metal competition, Calypso, is once again offering the winners anything they could possible wish for as a prize for conquering the various challenges he throws at them. Of course these are all hollow promises, as Calypso has a thing for punishing the winner in an ironic and twisted way.

Each holey plot is now accompanied with live action cutscenes, with Sin City-esque editing and amusingly bad voice overs. Don’t take these too seriously, if you look deeply into the budget actor’s eyes you can literally see the “Did Tom Cruise ever do stuff like this?” and “What am I doing?” thoughts bouncing around their head. Dark humour appears throughout, resulting in the odd chuckle, but mainly because it’s so bad.

It almost feels like Eat Sleep Play constructed all the environments and car models, before realising they hadn’t created a story the day before release. Thankfully, Twisted Metal makes up for this with its co-op and online aspects.

It’s hard to take in Twisted Metal’s visuals during gameplay as 90% of your time is spent zig zagging at high speed, but those looking to push their PlayStation 3 to its limits will be left rather disappointed. The various battlegrounds are well thought out, with fully destructible environments and well placed jumps, traps and powerups, but unfortunately this isn’t quit enough to distract you from its overall drab visuals. The car models themselves are impressive, reacting realistically to damage and turning into a limping inferno if your health gets dangerously low. You really do wince when you take a  devastating rocket to the flank,  especially if you have chosen one of the high damage low armoured vehicles, aka, glass cannons.

Twisted Metal boasts exciting explosion and weapon effects, throwing a much needed shot of high octane fun into the mix. Firing the none homing but brutal Power Missile from distance and watching it streak through the air, leaving a bright red smoke trail before delivering a crushing blow to your opponent is an immensely satisfying experience, even more so when playing online. Likewise, hammering through the maps at high speed with a smidgen of health, desperately trying to shake an enemy off your tail who is firing missiles at you like they’re going out of fashion results in some very tense moments indeed.

Twisted Metal’s accompanying soundtrack is very fitting, featuring tracks from the likes of Rob Zombie and Sammy Hagar that compliment the destruction and carnage perfectly.  Eat Sleep Play definitely nailed this part, coupling these tunes with crunching collision sounds, roading explosions and screeching tyres. Without this soundtrack, game play would definitely be more bland. Think watching football without the commentary.

Twisted Metal really does stick to its roots, even keeping the awkward and clunky control system from previous titles. Granted you get the option to change them, but fans will probably want to leave them as they are to achieve a very nostalgic experience. In the early stages of the game it’s not too difficult to get the hang of them, but as you progress you unlock various upgrades such as shooting behind, reverse boosting, different shields and more powerful mines to name a few. Pulling these combos off while maneuvering at high speed certainly knocks the difficulty levels up a notch.

As mentioned previously, Twisted Metal boasts a wide range of vehicles you can hop into. Initially you are restricted to a select few, but as you progress through the story more and more become available. Each one possesses three attributes, speed, armour and special. Special is a unique move that each vehicle has, which I guarantee you will mess up the first few times you use it due to not knowing what on earth it does. For example the “Reaper”, a demonic custom chopper, throws a chainsaw at the target which does reasonable damage. However if you pull a wheeley while holding the chainsaw, the driver drags it across the floor setting it on fire. Throw the flaming chainsaw and it becomes one of the most powerful specials in the game, with the potential to one hit some of the low armoured vehicles. Of course, pulling off a wheeley on the weak chopper is a difficult task when you’re being rammed by 18 wheelers and pickup trucks constantly.The majority of these specials have an alternate mode, again making it difficult to figure out what they do and master them.

Each level throws a new challenge at you, though these tend to get recycled throughout the (short) story. The standard Deathmatch of course makes an appearance, which involves simply killing every vehicle on the map to win. Other types include the Cage Match, which is probably the most well executed mode in the game. It involves a ‘safe’ area which you must remain in at all times, that frequently moves to another location on the map. If you stray from the cage, your grace timer begins to countdown, and if this hits zero you will start to gradually lose health. Fighting your opponents in these tight zones results in utter carnage, and when it moves the desperate race to its new location is exhilarating stuff.

Difficulty levels are turned up a notch when you encounter a Juggernaut stage. Juggernauts are huge heavily armoured trucks armed to the teeth with machine gun and missile turrets. They don’t show up on your radar, are very tough to kill and drive around spawning a new enemy every couple of minutes. It’s vital that you take the juggernaut out quickly before getting completely overrun, and you will most likely find yourself attempting these stages 2 or 3 times before you find a vehicle choice that works for you.

The story mode is tough even on the lower difficulties, and the new option of being able to choose cars depending on the challenge is a welcomed luxury. For example, I was a big fan of using the custom chopper “Reaper” for the race challenges, which in a nutshell involves racing to a target passing through checkpoints on the way, before racing back to the start. The Reaper is low armoured but very fast and agile, allowing you to get ahead of the pack and breeze through the rest of the track. However, I got stung by this tactic when I reached the finish line to be presented with a “Surprise Challenge”, where I had to kill the remaining opponents in a coliseum type arena. Of course, I got obliterated and had to rethink my vehicle choice.

Each of the three story modes is dotted with boss fights, pitting you against monstrous enemies and restricting you to a single vehicle choice. These fights are split up into stages, where the boss evolves in some form or other and can only be killed a certain way. You will find yourself hitting the restart option multiple times, but thankfully the game lets you start from the last stage you reached.

Those looking for a fresh spin on the Twisted Metal franchise will be left disappointed, as there isn’t much difference when compared to the old games. Simply put, it’s old school mindless fun that you can drop into when you have a spare 15 minutes, which is some what of a rarity these days. The AI isn’t particularly great, as your opponents seem to ignore each other whenever you get near them and suddenly focus on you. On more than one occasion, I found an enemy driving around and around in circles not reacting to anyone or anything.

Online play is not a new feature of the Twisted Metal series, but it’s certainly an improved experience over Twisted Metal Black: Online for the PlayStation 2. Leveling up and unlockables are all present, which is good for the consistent players but newbies will find themselves getting obliterated in the average vehicles they are initially limited to. At the time of writing the server browser was abit hit and miss, often resulting in connection errors, but the quick matchmaking option seemed to work fine. This was disappointing as the game modes were randomly chosen, but developers have assured us that these issues will be ironed out swiftly.

Most of the single player game modes are available online with the addition of extras, my favourite being a variation of capture the flag. Instead of a flag however, you must capture the enemies captain and drag them to a magical truck that accepts sacrifices in return for a nuclear missile. This must then be steered into the opponents statue, while avoiding enemy fire from the ground. It’s entertainment in its rawest form, with no real team coordination needed whatsoever. However, a typical game in this mode lasts around 30 minutes, which is a bit too long.

As a whole, the online experience is entertaining and I found myself getting the urge to boot it up when I had a spare 40 minutes or so. The unlockables such as vehicles and extra skins keep you coming back for more, and playing with mates amplifies the fun tenfold.

You can complete the story in a day easily. Depending on how quickly you pick up the controls and master the vehicles, you are looking at less than 8 hours of play. Thankfully, the online aspects do increase Twisted Metals shelf life slightly, but whether or not it’s worth paying full whack for slightly above average multiplayer depends entirely on how much a fan of the series you are.

Fans of the series will be in their element with the much more polished online play, whereas newcomers may be left with a bitter taste in their mouth if they make their judgement based on the single player. Local co-op is a great blast with friends, as well as the online multiplayer, but it’s hard to recommend Twisted Metal as a day one purchase. If you are a hardcore fan, you’ll love it. If you aren’t, perhaps it’s best to wait for a month or two for a price drop.