THQ have taken their time getting MMA’s premiere, and now only game, ready for their loyal fans. UFC Undisputed 3 is the final product and it far surpasses anything that preceded it.

When UFC Undisputed 2009 came out it was the first MMA game that had any impact on the games industry. Having been rejected by EA Sports, the UFC turned to another top player. THQ, who had huge success with the WWE video games, took a chance on a sport with a growing fan base, but that still wasn’t up there with other major sports. Since then the UFC’s popularity has skyrocketed and everyone wants a piece. 2009 was a good first attempt, but the sequel, UFC Undisputed 2010, didn’t bring enough progression. The game seemed more of a refresh with a slight graphical boost and roster change. Not much else came with it, and that wasn’t all that was lacking. A frustrating submission system and career mode, lack of DLC, and far too many flash KOs than a realistic MMA event ever has made the game lose its longevity. UFC Undisputed 3 has arrived with 7 weight classes, over 150 fighters and new modes – it’s clear to see Yuke’s and THQ have listened to the fans. 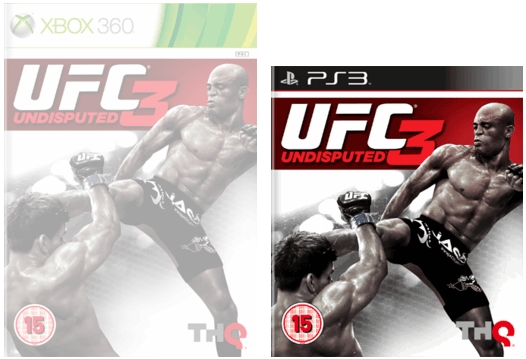 Without a shadow of a doubt, UFC Undisputed 3 is a great looking game. The essence of the UFC has been captured via the arenas, cutscenes and even the menus. The fighter models are superb, with sweat dripping and cuts opening up as naturally as they would in real life.

It looks amazing in motion too, with realistic animations adding to overall look and feel. Yuke’s has got everything about the sport spot on and, whilst the changes might be minor compared to previous editions, it just shows how reliable they are when it comes to graphics.

You can really tell Yuke’s worked hard to make sure the commentary in UFC Undisputed 3 was perfect. They scoured footage of previous fights to capture the right sound bites from Joe Rogan and Mike Goldberg. For PRIDE, whole new recordings were needed, so Bas Rutten and Stephen Quadros sat down and recorded a whole new set of lines for the fights. The commentary for both PRIDE and the UFC are amongst the most natural commentary you will hear in any sports title. There’s no lag and you’ll be graced with great facts about previous fights or other information that suits the in-octagon action to a tee. Even the menu music is authentic, taken directly from UFC broadcasts.

UFC Undisputed 3 brings a new look striking system to MMA table. In the past quick strikes were barely used, and power or significant strikes were your best way of hurting your opponent whilst standing. Now quick strikes can be used to break up your opponents moves and combos, they also use up considerably less stamina to throw. Holding down L1 makes your fighter throw strong strikes and these attacks use more stamina, but also cause a lot more damage if you land them in quick succession. The ground grappling system hasn’t changed significantly, but Yuke’s has introduced a new control scheme to help newcomers. The amateur controls for grappling consist of flicking the right analog stick up and down to perform transitions whilst on the ground or in a clinch. On the other hand, the pro controls keep the same format, requiring semi turns of the analog stick rather than simple up or down flicks.

A big part of MMA is Jiu Jitsu and the submissions that come with it. UFC Undisputed 2010 was disappointing to say the least, especially when it came to the submissions. The “shine” system was confusing and unpredictable, leaving fans frustrated and praying for a change. UFC Undisputed 3 has brought about this change and it has resulted in a dramatic shift in enjoyment when the fight goes to the ground. No longer do you need to be afraid of those pesky Kimuras or Armbars! Yuke’s has come up with a wonderful mini-game concept that shows an octagon cover the screen and a small “cat and mouse” chase pop up. Your bar must cover the opponents bar long enough to fill up the meter and make your foe submit in agony. This will give you a clear indication of why you’re winning or losing, making the experience much more enjoyable overall.

The pace of a fight can vary in MMA with different weight clases, and the UFC Undisputed 3 reflects that perfectly. Heavyweights will tire out if they throw bombs every 10 seconds, whilst Bantamweights can go 5 rounds at a frantic pace only the smaller fighters can keep up with. Also, the addition of leg kick TKOs are a huge boost for players who like to mix it up. Attacking the legs will slow down your opponent as well as giving you that extra option to finish the fight with.

When the UFC purchased PRIDE in 2007, many felt that would be the last time we heard from the organisation, but Yuke’s and THQ have bought the Japanese franchise back from the dead with PRIDE mode in UFC Undisputed 3. With Lenne Hardt screaming down the mic, Bas Rutten and Stephen Quadros on commentary duty, the game delivers the most authentic PRIDE experience since the good old days. Foot stomps, soccer kicks and knees to the head are all included, as well as the wrestling style ring and entrances complete with pyrotechnics! If you were a fan of PRIDE back in the day, you’ll instantly fall in love with this mode.

Along with PRIDE, Title Mode, Title Defense, Event, Tournament and Ultimate Fights remain amongst the list of modes. Title Mode allows you to fight your way towards a title shot. Title Defense allows you to defend the title you won in Title mode. Event mode lets you create a fight card with up to 8 fights. It must be said, the presentation in this mode is just superb, as the events open up with the Rogan and Goldberg talking carefully about the fight card. Tournament mode takes you through a 16 man tournament, either with UFC rules or through the PRIDE Grand Prix. Ultimate Fights Mode is one of the more in depth modes in the game, throwing you into one of many classic matches and then giving tasks to complete within a certain time. Complete the tasks and you’ll earn points that unlock videos related to the fights.

Sadly, whilst they’re not game breaking, the UFC Undisputed 3 package does have some minor flaws. First up, when you begin a mode, or stage in career mode, you are confronted by an abundance pop up menus telling you what each mode represents and what you can or must do. This is great for newcomers, but if you’ve played the last two games, it can become a little annoying. Tutorials are just as tedious, so much so that you’ll find yourself wanting to learn in-game rather than finish them off. Loading times are another slight issue, as it takes far too long for the game to start up, load into fights and switch between menus. There might be a good reason behind this, but it still detracts from the overall experience, which is otherwise exceptional.

Career Mode takes a slightly different approach this year, with the big news undoubtedly being the exclusion of Stat Decay. The one element that plagued UFC Undisputed 2010 has been removed and it makes for a much more enjoyable career path. You start off by creating your own fighter and guide him through the WFA. Unlike previous years, you can now compete for the WFA title too. You can even stay in the WFA to defend your title and build your stats, or you can take the jump to the elite organisation and fight in the UFC. You’ll start off in the Fight Night shows, eventually earning yourself a title shot and, if you’re good enough, you might even be invited to take part in the PRIDE Grand Prix. Along the way you’ll be given the opportunity to move up and down in weight classes, accept fill in fights on short notice and earn yourself more gear and sponsors. Stats are increased by completing mini-games such as transition drills, take down drills and even tire flips. It’s a great way to immerse yourself and find out how a real MMA fighter would train for an upcoming match or keep himself in shape. You’ll even have the opportunity to train with the best camps around. Of course, if all this isn’t enough, you can also start a career with a current fighter on the UFC or PRIDE roster.

Taking into account the endless possibilities of multiplayer match ups, the longevity of UFC Undisputed 3 cannot be called into question. To add to that, the career mode is incredibly deep and will keep you hooked throughout, whether you’re playing as created fighter or a real one from the bulging roster.

UFC Undisputed 3 is a massive step up from 2010, and has all the right characteristics that make it one of the best fighting games on the market. With a vast array of modes and fighters, it is sure to be ever present in every MMA fan’s console and might gain some new followers along the way.