Another month, another remaster, but this time it’s not just any old riff-raff. No, it’s Uncharted: The Nathan Drake Collection. Drake’s Fortune, Among Thieves and Drake’s Deception are all present, upgraded to 1080p and 60fps for the PS4. Does Bluepoint Games do each game justice and whet the appetite for Uncharted 4’s release early next year? The answer is a resounding yes. 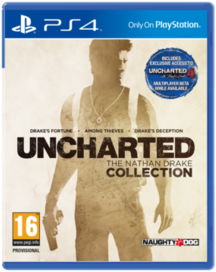 I’m not going to go into detail about the story or gameplay, mainly because both of these elements remain pretty much unchanged in comparison to their PS3 counterparts. That, of course, means all three games play really well, topped off by a blockbuster movie-like vibe. There’s a lovely balance to proceedings, with neither element overshadowing the other negatively. Each game is a shining example of the action genre, a great mix of shooting, platforming, puzzles and the occasional set piece to top things off. It’s like someone watched The Mummy or Indiana Jones movies and decided to create the Uncharted series as the gaming equivalent. They are just so much fun. In my humble opinion, three of the best action games ever made. Yes, I say three, throwing Drake’s Fortune into the mix, because the remaster does wonders for both its looks and gameplay.

Among Thieves and Drake’s Deception looked great already on the PS3, so the 1080p and 60fps (sticks to it 99% of the time too) remaster only serves to highlight the superb visuals and smooth gameplay. In the case of Drake’s Fortune, the visual upgrade also has a positive impact on the way the game plays. You see, the original release had a slight input delay, making sections where you needed to be precise a tad frustrating. This remaster eradicates that issue completely, offering up a smooth experience that is up there with the latter two games. The aiming feels better as well, far more intuitive and logical than before. Animations are not quite up to the quality of its bigger brothers, but textures (noticeably more detailed), lighting, particle effects and all that other technical stuff is top notch. That horrible screen tearing that was present in the original release has completely gone too.

Honestly, I’ve always thought Drake’s Fortune was the weakest of the three main Uncharted games, but after playing it again on the PS4 I’ve got a newfound appreciation for it. I’d still rank the second and third above it, but that gap isn’t as wide as I when I first played the original. It’s weird, and I can’t definitively put my finger on why this is the case. Has it aged really well, or have the enhancements made it better? Probably a bit of both, but what I do know is that I really enjoyed playing it again after almost eight years.

The only slight downer is that the multiplayer component from Among Thieves and Drake’s Deception doesn’t make the cut. It’s a shame, but I understand why. I don’t want to sound like an apologist, but here you have three of the most technically demanding games on the PS3 remastered in lovely 1080p and 60fps. I mean, come on, getting them on a single blu-ray disc is an achievement in itself. Not only do the in-game visuals look better, but the cutscenes do too. Sure, they are not rendered in real time, but they are sharper and cleaner than what was present in the PS3 versions.

Plus, not that these additions completely negate the exclusion of multiplayer, you have the new brutal difficulty, explorer mode (for beginners), a speed run option and even a cool little photo mode if you fancy sharing some Uncharted snaps on social media. You can even play as the likes of Elena and Sully, thanks to the 80 bonus skins that have been stuffed into the package. And that’s exactly what Uncharted: The Nathan Drake Collection is, a top quality package containing three of the best action game ever made. Oh and you can switch between them via the menus with ease! Just thought I’d drop that in at the end.

Drake’s Fortune benefits the most, looking and playing noticeably better than its original release. If you’re anything like me, you’ll gain a newfound appreciation for the Naughty Dog’s first entry in the series. It’s “aged” really well. That said, Among Thieves and Drake’s Deception are no slouches either. The same thrilling gameplay remains, now married up with super sharp visuals. Unless you look super closely or overanalyse what’s going on, either of the two could pass for a native PS4 game. Bluepoint Games has done a terrific job.

The exclusion of multiplayer is a slight miss, sure, but it’s still not enough to detract from what is a truly high quality package. I mean, come on, it’s three of the best action games ever made remastered in stunning 1080p and 60fps. Whether you’ve played them or not, if you own a PS4, Uncharted: The Nathan Drake Collection is a must buy. Cheers, Sony. I’m now itching to play Uncharted 4!

Review is just padding for the Metacritic. Game looks 90% the same as on Ps3 and doesnt even have the MP modes. So you get more game if you just buy the Ps3 versions….. yet it is a 10/10.

What an idiot. Just because there is nothing to blame or criticize, because, well, those 3 games were already fantastic titles that pushed the hardware to a point the X360 could only dream of reaching, because it’s basically the uncharted goty series… with ultra high res textures, with tons of… Read more »

You stankin a$$ pony…. I cant have cordial conversations with stupid @ss barn filth such as yourself. But I will try. I never took issue with the game not being good or worthy…. my issue is the 10 for 10. I work in media I have worked with computer graphics… Read more »

Uncharted series won trillions of goty titles. Perfection doesn’t exist, but if a game is better than 100 or 300 other titles, and dozens thousands professionals claim it is that good, then, we’ll, it must be the case. If naughty dog was simply using 1080p res and 60 fps, that… Read more »

All that sounds like to me is you convincing yourself you didn’t just get F#$ked. You tellin me about Xbox owners that never played the series (and I guess they wont have any interest in the MP for some strange reason)… you tellin me about Ps4 outselling Xbox One 3-1… Read more »

All that sounds like to me is you convincing yourself you didn’t just get F#$ked. You tellin me about Xbox owners that never played the series (and I guess they wont have any interest in the MP for some strange reason)… you tellin me about Ps4 outselling Xbox One 3-1… Read more »

Erm… We’re not on Metacritic. But hey.