I jumped a lot, but I liked it…

Originally starting out as a Move game on the PS3, Until Dawn was reintroduced as PS4 exclusive in August 2014. Has stripping away dedicated motion controls and the move to a more powerful consoled helped the teen horror, or is it a complete nightmare? Well, it’s certainly scary, but in a good way… 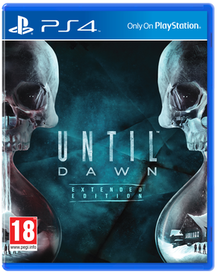 Confession, there were several times during my playthrough of Until Dawn where I jumped. I got scared. Yes, me, a 30 year old man. The game completed its objective, it scared me, and that kind of sums up Until Dawn in a nutshell.  It does exactly what it sets out to do and does it really well. Taking its inspiration from popular teen horror movies like Scream and I Know What You Did Last Summer, Until Dawn’s set up is very much cliché, but it works. Eight teens (all the stereotypes are present) return to a creepy cabin in the woods a year after a tragedy, looking to put things behind them and have a good time. As you’d expect, things don’t go as planned and it all ends up being a race to survive (wait for it) until dawn. The story isn’t exactly Shakespeare, but that’s fine because it doesn’t need to be and it’s not trying to be. It’s cheesy teen horror stuff, but (no spoilers) surprisingly well written and strangely absorbing. The way the characters unravel is surprisingly interesting too. Your opinion of them will go up and down then back again before the credits roll. It’s great. The best part though? You get to decide how things pan out in Until Dawn.

You see, choice is big part of Until Dawn, with a big deal being made of the whole Butterfly Effect thing. Seriously, it’s the first thing you see when you start the game and you’re reminded about it almost every single time you make a decision as you play. Unlike most games, Until Dawn makes good on its claim. Your decisions do actually matter, impacting the twists and turns of the story. I went back and played a few sections again, making different choices… Yeah, like I said, Until Dawn makes good on its claim. Plus, because (within the boundaries of a teen horror) the story is well written, the majority of decisions you have to make are tough, genuinely putting on the spot. On more than one occasion, I found it difficult to make a choice, but had to press a button or push the right stick and eventually make one before the timer ran out.

And that’s another thing that Until Dawn does well. For an “interactive experience” (I still think it’s a game, just different), it nails the controls. Think Heavy Rain or Beyond: Two Souls and you’re not too far off what is present here. The difference is that you have a bit more control in Until Dawn. You can move around in a similar vein to something like old school Resident Evil, meaning you only control character movement and not the camera. Given the context of Until Dawn, this set up works, helping to create a tense atmosphere throughout. You might occasionally move a character backwards instead of forwards as the camera angle changes, but it’s not really a major issue. Spend a few minutes with the game and you’ll be fine. Movement is also deliberately slow, helping to build tension, especially in the latter half of the game. That said, if you find it too slow for your liking, you can press L1 to speed up a little.

Staying with the controls, quick time events (QTEs) accompany sections where you need to make snap decisions or movements, many of which occur when you’re running or climbing. Depending on the situation, the time you get to press the correct button will vary. My advice, just make sure you ready! Movement of the right stick to make big decisions and holding R2 to pick up or interact with objects round off the main/core controls, but there a few instances of the DualShock 4 being used nicely. For instance, you’ll swipe the touchpad to unlock a phone or light a match. More interestingly, in certain scenarios, your tasked with not moving the pad (keeping the light bar within an allocated space) to not get found by whoever or whatever is after you. Sounds easy enough, but there are some genuinely nail biting moments that will test your nerve. It’s an excellent use of the PS4 pad’s motion sensing ability. In fact, there’s a whole other option to use the DualShock 4 as a motion controller during the game, but I found that to be less intuitive and fun than the traditional method. The option is there though, should you wish to try it.

Elsewhere, Until Dawn attempts to shake things up a little by placing totems around the locations you navigate. Pick up these statues and investigate them, you’ll be shown a 2-3 second premonition. These visions vary, showing deaths and other possible outcomes. Think Final Destination and you’ll have an idea what I’m on about. You probably won’t find all of them (definitely not on your first playthrough), but that’s beside the point. The ones you do find will plant a seed in your head, making you look ahead, be weary and go through all sorts of mental gymnastics. It’s a very clever way of adding some depth to the gameplay, a bit of outside-of-the-box thinking. Bravo, Supermassive Games. Bravo.

Another area where Until Dawn (mostly) excels is its presentation. It looks absolutely stunning, with every nook and cranny oozing that teen horror movie vibe. The lighting is fantastic, playing a huge part in creating a foreboding atmosphere throughout. Captured via real actors and actresses, including big names like Hayden Panettiere and Peter Stormare, all the characters are portrayed brilliantly. Despite the occasional drop in frame rate and odd facial expression, the voice acting and performances from each actor are genuinely believable. It’s usually hit and miss when real actors are involved in games like this, but it’s definitely not a case of the latter when it comes to Until Dawn. The audio design is great too, with a suitably chilling soundtrack, but not even that was my favourite part of the game’s presentation. That honour goes to the episodic delivery of it all. I’ll admit I’m a sucker for this type of thing (loved it in Alan Wake too), so I might be a tad biased, but I loved the whole ‘previously on Until Dawn’ thing before each new section.

My only real niggle (frame rate drops and weird facial expressions aside) was that I felt the last part of the game dragged on a little bit too long. It could’ve been streamlined, even if there were a few loose ends to tie up. Apart from that, I thoroughly enjoyed my 8 hours or so playing Until Dawn. I’ve already started playing through it again, making different choices and seeing how the story pans out. If it clicks and you get what it’s all about (like me), I’d imagine it’s something you’ll want to do as well.  That’s how well this teen horror is written and presented. You might see certain things coming and jump a little less, but that doesn’t make the experience any less fun. It certainly hasn’t for me so far. Yes, I’m still jumping at bits in my second playthrough, and I’m not afraid to admit it.

A pleasant surprise, Until Dawn achieves exactly what it sets out to do. It delivers a story and characters that are better than most modern horror movies, keeping you on the edge of your seat until the credits roll. The fact that you control what happens is the icing on an already very delicious cake. Still, that shouldn’t take away from the gameplay as there are some very interesting ideas present here, executed brilliantly by Supermassive Games. Not even a couple of minor technical issues and a slightly elongated last episode can hamper what is a genuinely must play PS4 game. It’s bursting with replay value too. Hopefully it sells well. If not, cult hit status it is.

Thanks for reading. Hope you enjoy the game as much as I did.

This game could of been doing with nudity and sex in it.

Great review, for a great game.

Thanks for reading. You picking it up?