Right then, Watch_Dogs. Officially the biggest selling new IP in history, and Ubisoft’s best ever launch to go alongside it. A lot has been made of the initial reveal, and I’ve picked it apart on the podcast more times than I’d care to imagine. A wave of initial hype and overpromising trailers eventually led to a lull that I hoped that the full game would wash away and spark that interest back in this flagship new franchise. 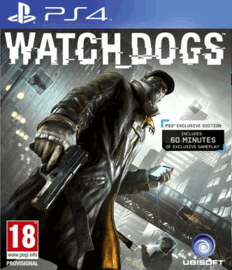 I’m sure a lot of you will know the story by now, but just in case you don’t, here it goes. Aiden Pearce is a hacker. During a hacking operation gone wrong, he seemingly crossed the wrong people, which led to the death of his niece, and a tale of his revenge. Honestly, the story in Watch_Dogs isn’t much cop. At best, it’s generic. At worst, it’s contrived and predictable. I’m not going to lie, I didn’t get round to finishing the story. At the time of writing, I’ve just started the fifth act. My reasons will become clear shortly, but unless the story takes a rapid upturn in the last section of the game, it’s a horribly disappointing storyline for a game of this size.

Watch_Dogs was meant to be the game that showed off the power of the next gen consoles on a graphical front. I’m not going to draw too many comparisons to “that” reveal trailer, because quite frankly, it’s been done to death. On its own merits, Watch_Dogs looks very good. It runs at a steady frame rate, and the lighting is undoubtedly impressive. Vehicle models are varied and the vast majority look fantastic at times. The problem is that the graphical side of things rarely goes above “solid”, and for a game that the next generation was seemingly pinning its hopes on, that’s unfortunate.

The concept of Watch_Dogs was sold with “Hacking is your weapon”. Sadly, the game opens with a scene that says, very loudly, “Actually, weapons are your weapons. Here’s a gun”. I would have loved to have played the game that was seemingly initially promised. Hacking as a mechanic, genuinely, is great. The abilities that Aiden’s mobile phone provide can provide some fantastically exciting moments as you escape the police, militia or just try and sneak your way into one of many restricted areas throughout the game. The problem comes when it ends up being far more efficient, and much easier, to equip a silenced pistol and headshot your way through the enemies. When the shooting is so weighted in Aiden’s favour that it makes areas this easy to get through, it’s hard to justify hacking your way through multiple scenarios unless it’s absolutely necessary. At times, it does feel that the game is going down a “Push Square to win” route, particularly if you’re being chased by police/militia and get into a boat. All you need to do is disable a helicopter, get in a boat and you’ve instantly lost your tail!

The moment I gave up on Watch_Dogs came during a mission called “By Any Means Necessary”. The actual mission was a fairly standard “Go here, sneak in, avoid people and hack into a system” mission that the game is full of, but the finale is horrendous. After following an enemy through a door, Aiden is suddenly met with an empty roof. No signs of the guy you were just chasing, just a lengthy monologue. After that, enemies spawn in from literally nowhere. It’s the absolute definition of lazy game design, and it then just turns into a standard “shooty bang” mission, with no rhyme or reason to be there. The feeling runs through a number of missions within the game, and it’s so disheartening to see. There are gems in the rough, particularly at the start of act 3, but they are exceptions to the rule.

One of the areas that Watch_Dogs implements very well is the asynchronous multiplayer environment that so many games seemed to be showing off at E3 last year. Provided you’re not on a story mission, your game can be “invaded” by anyone at any time, and you can of course return the favour. The thrill of tracking someone down as they hack your character’s phone for information is exceeded only when you find them and dispatch of them in a chase afterward. It’s an area that works really well and I’d love to see more of it in games, provided it’s implemented properly.

Many comparisons have been drawn to the original Assassins Creed with Watch_Dogs. It’s easy to see why. Somewhere underneath the surface is a brilliant game waiting to get out. Sadly, the game that’s been released is a frustrating almagamation of half baked ideas, and outdated mechanics overriding exciting new ideas. There are points in the game where it feels downright unfinished, which really does shock me. It’s an incredible shame, as the premise behind the game is superb, and a sequel is not only guaranteed, but hopefully will be a springboard for better things.

Ultimately, there are a number of things Watch_Dogs does right. It’s a solid enough feeling open world to warrant checking out. The hacking mechanic, whilst at times negated by an easy shootout, does open up a huge number of possibilities within gameplay. A solid base for Ubisoft to build upon, Watch_Dogs does more wrong than it does right, and ultimately results in a frustrating example of a game designed by committee and with very little that is “next gen” provided. Oh, and Ubisoft? Please get rid of that silly underscore for the sequel.