The Witch and the Hundred Knight: Revival Edition Review

The big guns behind Disgaea are back. The Witch and the Hundred Knight saw a PS3 release back in March 2014 and is now back for a PS4 release with a bunch of new features and well needed fixes. Hundred Knight needs you One Hundred. 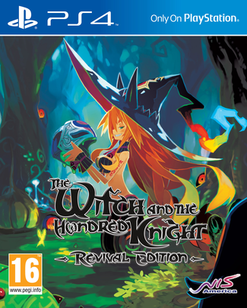 I want to make it clear as I begin my review is that almost instantly, The Witch and Hundred Knight: Revival Edition reminded me a lot of Disgaea so I will end up making a few comparisons here and there.

When the game starts out you are spoken to by a character known as Metallia. She will ask you your name; you have the option of choosing but she will still refer to you as The Hundred Knight. As you progress and find yourself in a swamp like place, you are told by Metallia to do some tasks such as fend off enemies; run and perform basic actions. This is basically a small tutorial stage. You fend off a small boss who you had been running from previously with the Dumbass Long Sword that you had been given by Metallia. Despite its name, it is possibly the best name for a weapon I have ever come across and strength wise it really is not as bad as it sounds.

After the tutorial stage the story becomes more clear. Metallia is known as a Swamp Witch who lives with her robot servant known as Arlecchino in Niblhenne; a very poisonous swamp vicinity surrounded by vast forests. While incredibly strong, Metallia has her weaknesses. She cannot leave the swamp ever; which is where The Hundred Knight comes in. She relies on you to release Pillars in the forest which will in turn extend the swamp and of course allow her to exist more outside of the swamp she currently resides in.

When characters are conversing with each other it is shown in text at the bottom with each character who is currently chatting, in a very similar fashion to Disgaea. During dialogue you are given options to choose from: These are Affirm, Deny, Question and Ignore; pretty self explanatory; I’m not exactly sure how much of an effect it has on the game but I chose to Ignore Metallia the first time to which she warned me and not to do it again. I soon caught on to her personality. She has a very condescending and very mean tone to just about everyone. Very opposite to the Demon overlords of Disgaea who go and do their evil deeds in a more comical way; Metallia is very abusive and rude in just about everything she says and does. At one point it went almost overboard in that it may offend the wrong person enough to turn the game off and walk away; let’s just say I was pretty shocked myself. Still, there is that hint of humour to the game even if it is dark.

The gameplay element side of things is really fun, probably the most I have had in a long time. It is a hack and slash with elements such as rolling and dodging; you can equip up to 5 different weapons in different weapon sets. Weapons include Swords, Spears and Maces all of which have different effects. Whilst the Sword is quick, the Mace is much slower but the bluntness of a Mace can be much more effective on certain foes rather than the Sword. As you attack with one weapon, the others in the set follow creating a combo all of which use stamina. This is also used to dash but will run out causing you to fall down on a spot for a brief moment but quickly recharges.

The most important gameplay element which wasn’t explained to me or at least not properly is GigaCals or Gcals. This is something The Hundred Knight needs to survive but will deplete and certain factors such as being attacked will drain GCals faster but once these run out he will be forced from any dungeon when he dies; pretty much meaning time is of the essence! There are however ways of gaining GCals such as using healing items or consuming enemies that are low on health.

Tochkas are magical abilities earned in the game that can do certain things such as projectiles; enemy decoys and traps foes; there are some other interesting things The Hundred Knight can do such as scaring an enemy to death or making them attracted to you and thus becoming a part of your aid temporarily.

Dungeons can be very long so acting quick is important but of course messing up can be very costly. They are designed in a way though to keep you in there, risking for the bigger rewards. Stay in a dungeon long enough and you can reap some great bonus rewards but if you fail then some of the hard earned rewards could be lost forever. As you gain more kills and experience you will gain more points on the board; fill the whole board and watch as you rack up a ton of loot; again, quite similar to Disgaea and its stage clear bonuses.

A few hours in the game really does kick you about and you will no doubt find yourself running back through previous efforts; I do feel the game wasn’t telling me important gameplay elements early on when it would of been beneficial; it wasn’t till later on I found out how certain things work. The only option you have is to take a look at the Witches Guide Book with 58 pages of handy information although the first page tells you that there are 58 pages of handy information (so that’s 57 then?). However, this does a good job of explaining the things you need to know to you and gives you clear instruction on how to perform certain actions.

The music and sound is so typical of the game it represents; it is so fiendish and underworldly and I could easily of mistaken any track from this game for one in Disgaea. Yup, Disgea is a similarity once again due to the way to looks graphically and sounds, not forgetting the story about demon overlords!. The only real difference is the gameplay itself.

Once you do get the grip on gameplay, the game does come into it’s own and flows very well and most importantly is fun. There are some very long dungeons so the game can feel very repetitive; also the lengthy cut scenes can have an effect on repetitiveness early on.

The Witch and the Hundred Knight: Revival Edition does feel very rewarding if of course you can get past its initial grips and quite insane difficulty and dark humour. On its own this is a great hack and slash JRPG and anyone who enjoys Diablo or Gauntlet could very well get into this game. I have not witnessed any freezing which the PS3 version was well known for, so it is good to report that seems to have been fixed. Whilst similar, it is a good change of pace from the Disgaea series and I am hopeful we will see a sequel from Nippon Ichi Software sometime in the future.