If I look back at the early days of my life, I have been very privileged when it comes to the games I grew up with. Sonic, Mario, Donkey Kong and Alex the Kidd just to name a few. Another game to add to that list is Worms. The Worms series keeps coming and coming, with the latest one (Worms: Revolution) released in October last year. Fast forward seven months and Team 17/Mastertronic have released Worms: The Revolution Collection. Does fond memories flooding back? Read on to find out! 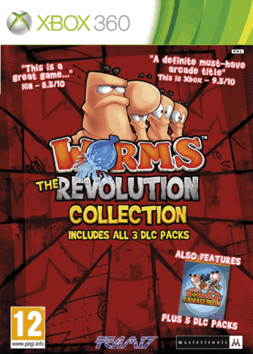 I must admit, It’s been a while since I have played a worms title and starting Worms: The Revolution Collection, I wasn’t sure if the developer would go for major changes in the games visuals in order to freshen the series up. Starting up Worms: Revolution, I was very happy to see that my memories were unfounded. Those fantastic 2D visuals were still here today and better than they ever have been.

The developers have done a fantastic job in keeping the visuals that everybody loves in the game whilst also making them feel fresh adding vibrant colors giving an overall fantastic visual experience that newcomers and veterans of the series will come to enjoy and appreciate.

Back in the day, one of my favorite things about Worms was the humerus sound that would accompany the gameplay and Worms: The Revolution Collection delivers all those memories with Worms 2: Armageddon and Worms: Revolution. Id heard most of the funny narration already in Armageddon but Worms: Revolution delivered even more funnies with the help of  wildlife documentary maker Don Keystone, voiced by The IT Crowd actor, Matt Berry. Added with the famous sayings from the Worms themselves, Worms: The Revolution Collection certainly brings the humor out in abundance with two fantastic Worms titles.

For those who haven’t played Worms before, the mechanics and idea behind the game are very simple but its the simple ideas that help create one of the best series linked to gaming. Worms comes as a tactical 2D strategy game but it can be mastered with much ease. Players have a team of Worms each and will battle each other using a variety of different weapons and also using the environment to their advantage. Worms: The Revolution Collection comes packed with all this gameplay with Worms 2: Armageddon whilst also freshing it up with the newest Worms title, Worms: Revolution.

Each game comes packed with single player missions in which players come facing a variety of different locations. Worms: Revolution also adds in some 4 new classes which you can arrange your Worms formation with. These new classes include Soldier, Scout, Scientist and Heavy which all come bringing their own individual abilities and advantages. Worms: Revolution also comes with a brand new game engine in which there are some great physics in place. Players can blow up certain items in levels allowing for water to pass through to get to enemy worm using the environment to their advantage in the battle to the end. Playing through stage after stage, I must say my love for the series come back in abundance using weapons such as the Bazooka, Dragon Ball, Teleport, Air Strikes and much, much more to use against your enemy worms.

Worms: The Revolution Collection is packed with content. The game comes packed with Worms: Revolution plus 3 DLC packs that was released. That’s not to mention Worms 2: Armageddon which comes complete with all of the five DLC packs that was released for this title. For newcomers or veterans of the series, this will keep you occupied for hours on end at a time with no sign of letting up. Add in that the ability to play online with Worms: Revolution, those wishing for a collection to keep them occupied for a longer term can look no further than Worms: The Revolution Collection.

Worms: The Revolution Collection reminded me exactly why I fell in love with series in the first place. All memories that were locked away came flooding back. Worms 2: Armageddon was a fantastic game in its own right when it was originally released, and Worms: Revolution certainly builds on that success and hints at a very good future for the series in general.  Worms: The Revolution Collection is a bundle of gaming love that no-one should miss, whether you’ve played a worms title or not.