Last year I took on the task of reviewing WWE ’13, stating it was an enjoyable game, but a new direction was needed for the series to reach the heights of the PlayStation 2 days. Fast forward to the present day and it seems like the prayers of fans (myself included)were answered as 2K Sports took over publishing duties from THQ. With Yukes still present in terms of development, did 2K Sports really have enough time to stamp its authority on WWE 2K14? Read on to find out. 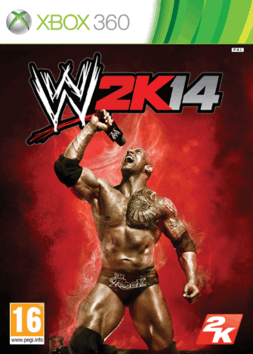 The quality of visuals and overall presentation is pretty much on par with last year’s effort, and that’s no negative as WWE ’13 was very good in that department. If you’re a fan of WWE shows such as RAW and Smackdown, then you’ll be happy to learn that they’re replicated impressively in WWE 2K14. Animations, character models and arenas are all represented well, with the visible emotions of each wrestler being the standout graphical aspect. Playing through the ’30 Years of WrestleMania’ mode, I took on a retiring Ric Flair as Shawn Michaels and it was great to see the development team had paid special attention to the emotion attached to that match. The Heartbreak Kid even had tears running down his face which was a nice little touch.

An area where the visuals need some attention though is the crowds. They’re still very much by the numbers and not really representative of the amazing crowds that attend matches at the real life shows. With next-gen on the horizon, I would also like to see much more attention paid to the crowds with far greater processing power available on PS4 and Xbox One. Personally, I’d to see the crowds copy the wrestler’s high rope celebrations because, at the moment, it’s hard to tell whether they’re watching a WWE showor dancing away in a night club!

The commentary in the main part of the game, especially in 30 Years of WrestleMania, comes from the legends that are Jim Ross (JR) and Jerry ‘The King’ Lawler. Much like last year’s Attitude Era mode, the duo talk you through the most iconic moments throughout WrestleMania’s history. Unfortunately, just like last year, the commentary is very much hit and miss. JR and Lawler are WWE commentary greats, but in WWE 2K14 (on most occasions) you can tell they’re reading from a script as they’re in to real heart or feeling behind what they’re saying. The Undertaker vs. Triple H at WrestleMania 27 was an amazing match and featured some of the best commentary ever in WWE history, but that just doesn’t come across during the match in WWE 2K14. The chanting and reactions of the crowd is another audio related disappointment. They were okay last year, but I was hoping for some real improvement in WWE 2K14 with some loud and natural sounds emanating from the crowd. Sadly, that’s not the case and instead you’re just “treated” to random looping noise that kind of sounds like crowd.

Unfortunately, it seems like 2K Sports came in too late to have a major influence on the final release of WWE 2K14. Don’t get me wrong, you can tell that they’ve had a bit of an influence with the presentation, but gameplay wise there’s no real difference compared to last year’s outing. In fact, if you were to look at WWE 2K14 and WWE ’13 side by side, you’d be hard pressed to notice a difference on the gameplay front, and that’s disappointing news for fans who are ready to fork out £40 each year. The controls are exactly the same, so if you’ve spent a lot of time with WWE ’13 then you will have no problem settling into you first match in WWE 2K14. The reversal system, whilst handy, can become a real pain especially on the harder difficulties, meaning there is no real sense of momentum in matches against the CPU.

I mentioned it briefly a bit earlier on, but the fantastic Attitude Era mode in WWE ’13 has been replaced with the equally impressive 30 Years of WrestleMania mode in WWE 2K14. Here you play through the most iconic matches in the event’s history, right from the first WrestleMania to last year’s WrestleMania 29. Hulk Hogan vs. Andre the Giant, Bret Hart vs. Randy Savage, The Rock vs. John Cena and The Undertaker vs. Triple H are just some of the iconic matches that you’ll get the chance to play. Just like last year, each match will task you with completing specific objectives and you’ll also be asked to replicate moments that happend in the actual WrestleMania clash. It’s a fantastic mode, with vast amounts of nostalgia attached to it if you’re a long time WWE fan. On a personal level, I’m not be old enough to remember the first WrestleMania, but it was great to learn about what happened and re-live moments from WrestleMania 10 onwards.

Depending whether you wacth all the cutscenes, the 30 Years of WrestleMania mode will last you about 10 hours. There’s also a ‘Streak’ Mode present which allows you to play as The Undertaker or another WWE superstar as you try to end or carry on the now legendary streak. This is the mode with the hardest difficulty attached to it and, although I didn’t have real problems defeating CPU opponents, those new to the series will find it a real challenge. Add on the other standard modes, a deep creation tool and the usual WWE Universe mode, WWE 2K14 could well see you occupied for a while. However, with no real gameplay changes, I don’t envisage the game having the staying power of more than a month or two.

With no real added features or major gameplay changes WWE 2K14 is little more than just an update of last year’s release. Yes, the 30 Years of WrestleMania mode is great, but could’ve essentially been DLC for WWE ’13. If you’re a die hard WWE fan then it”s worth picking up, but it’s WWE 2K15 where the real impact of 2K sports taking over will be felt. Let’s hope they can deliver and produce a truly great WWE game.