2K Sports once again team up with the development team at Yukes to bring their annual WWE title to the table. Stone Cold Steve Austin fronts this year’s offering, enticing players to hand out a can of whoop ass to everyone in their path. Those who have followed my WWE reviews in the past will know that the last few titles have frustrated the hell out of me. Would WWE 2K16 finally get the series back on track? Unfortunately not, and I shall explain why…. 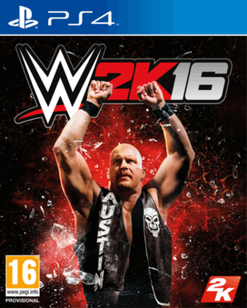 Frustation, frustration, frustration. Sums up my thoughts about WWE 2K16 perfectly. However, not ‘everything’ about this year’s WWE offering is bad. The authenticity of WWE 2K16 is absolutely spot on, much credit to the team at Visual Concepts. Everything you see on Monday Night RAW, SmackDown and a PPV in real life is perfectly replicated in WWE 2K16. Visual Concepts know how to visually represent a sport, you only have to look at the NBA 2K titles to realise that. Everything down to entrances, lighting and the WWE Universe are all replicated brilliantly in WWE 2K16, an area where the game definitely shines.

Unfortunately, the visual power of WWE 2K16 is not transferred as well to the sound, more so the commentary team in WWE 2K16. Any credit to the commentary team in the game has to go to one of my favourite commentators of all time, Jim Ross. He is the best commentator available, re-creating commentary for classic Stone Cold Steve Austin matches in the 2K Showcase mode. To say WWE in general miss him is an understatement, as Michael Cole and John ‘Bradshaw’ Layfield are just so poor and boring to listen to throughout matches. They need all the commentators to sit in a room together and record live reactions. Without it, the commentating just feels as stale as it ever has been.

Stale is also a word I would give to the gameplay on offer in WWE 2K16. Before I actually got my hands on the game, a few other reviews suggested that WWE 2K16 was a turning point for the series, the best we have had for years. Unfortunately, I have to completely disagree with this statement. It all feels the same, with a few unnecessary features added in. Some of these brand new gameplay concepts to the game include the limited reversal system. In the match, you will have a bar, which is equally separated into 5 sections. Each section will represent a reversal that you are allowed to execute with the use of the R2 button. Once executed, one of those bars will disappear, regenerating over time. The problem is that when you have used your reversals, you just have to take what damage your opponent is offering out until one or more of those sections have regenerated fully. It’s a very unrealistic and to me, gimmicky feature which does nothing to further implement realism into the WWE games.

The pinning system is just another part of the gameplay that really disappointed me. You have three attempts to hit X in the red part of the circle which goes around when your opponent is attempting a pin on you. This red section will get smaller and smaller depending on how much damage you have taken in the match. The trouble is, you’ll find that even if you have been in the match 30 seconds and your opponent has hit a suplex or two, it is very difficult to time the button press right in order to kick out. It shouldn’t be that difficult at such an early stage. I much preferred when you had to button-mash in order to kick out. Not the deepest system but a system that was reliable.

Perhaps the one saving grace to WWE 2K16 is the utterly brilliant Showcase Mode on offer. Based on the cover star Stone Cold Steve Austin, the showcase mode lets you relive some of his memorable moments. Stone Cold is one of my favourite SuperStars of all time so to take a ride back to where it all begun and re-create some of his iconic matches was brilliant and nostalgic. Like I said previously, there is some great commentary from Jim Ross and Jerry ‘The King’ Lawler which add to the fantastic storylines he has had over the years against the likes of Bret ‘The Hitman’ Hart, The Rock and many more.

It feels like I am saying it time and time again but 2K really need to grasp the potential of WWE video games. A whole new direction is needed to give WWE 2K the shot in the arm in truly deserves. With MyCareer still feeling too stat based and less storyline orientated, there isn’t much on offer in WWE 2K16, apart from the Showcase mode. The creation center has been improved somewhat, although the ability to take a Diva through MyCareer mode is omitted. Unfortunately, now isn’t the time to down two beers in Stone Cold fashioned success, this is the time where 2K really need to go back to the drawing board with WWE.