A few years back, a long dormant franchise was reignited by Firaxis to wild acclaim from the gaming audience at large. Its punishing difficulty outweighed by the fantastic sense of depth and tactical knowhow that it provided you with. That game was XCOM: Enemy Unknown. Now, just over 3 years later, the sequel arrives, attempting to keep the legacy going. 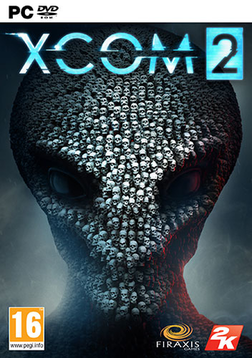 If you’ve ever played 2012’s Enemy Unknown, you’ll probably be well briefed as to what XCOM 2 includes. It’s a turn-based strategy game, where you take your small squad up against a number of enemy groups to take them on and save earth. Chances are that if you played Enemy Unknown, the aliens won, you got angry, threw something and then swore to never play it again. Well, you’ll be happy to know that this is exactly where XCOM 2 picks up. So no excuses.

Humanity, then, is buggered. The aliens have formed the Advent Corporation, essentially enslaving the human race under the guise of peace and unity. A small handful of humans have taken what remained of the XCOM project and started up pockets of resistance across the globe. The prologue mission sees two intrepid soldiers on a mission to retrieve a “high value target” from an Advent storage facility. A couple of minutes later, the HVT is taken back to the Resistance HQ, and that familiar line comes into play. “Welcome back, Commander.” And suddenly, you’re right back into it.

Gameplay wise, XCOM 2 is basically more of the same, with a couple of crucial twists that mostly add to the experience of Enemy Unknown. The biggest, and undoubtedly the best, addition is the concealment feature. At the start of each level, you get dropped into enemy territory, with the Fog of War covering the entire battlefield. So far, so standard. However, the difference with XCOM 2 is that you’re hidden from the enemies until you either encroach on their (clearly labelled) field of view, or attack them. Herein lies XCOM 2’s first major plus point – ambushes. If you can get eyes on an enemy and set your squad up in just the right way, you can carry out a lethal trap to ensnare your first set of enemies. There isn’t much more satisfying than creeping up to a group of Advent soldiers or aliens, setting almost all of your squad to Overwatch, then using the remaining team member to use a grenade to scatter the units, like a cat among pigeons. The feeling you get when the last Sectoid (the human like aliens) is dispatched before they even knew you were there is among the best you can get from games, it’s utter bliss. Having the anxiety of being decimated by the first set of grunts that you find is no longer a factor, and the game’s all the better for it.

The second biggest addition is that of the countdown timers. For a number of critical story missions, there will be a countdown in the top right hand corner of the screen. You’ll need to get to the relevant objective before this expires, or you’ll fail the mission. Whilst a good way to encourage players to utilise offensive manoeuvres, I can’t help but feel they could have maybe thrown an extra turn or 2 in, as sometimes it feels just that little bit too hard, particularly if you end up with a group of Mutons charging down on you after turn 2. Next up in the new fe cvbnature stakes, and one that’s an undoubted success, are the melee attacks. Certain classes of character will allow you to saunter up to an enemy, and with a casual flick of a sword, implement some hefty damage to them. At least, you will if you can overcome the hit percentage that inexplicably exists for a close quarters melee attack.

Yes, everyone’s favourite mechanic is front and centre once again, and I guarantee you’ll find yourself muttering to yourself “Do I try to land this 48% shot?” more than once. In fact, if you’re anything like me, you’ll be screaming “BUT YOU HAD A 92% CHANCE TO KILL IT! WHY?!?!” during a particularly nasty battle where the character you named after your colleague gets eviscerated thanks to another colleague who missed a shot. And then you don’t talk to that colleague for a few days because you’re so mad. This may or may not have actually happened. But it’s part of the core XCOM experience that really helps elevate it above the average game. Like a really gory and messed up game of chess, it’s hard not to develop the most intense love/hate relationship with XCOM 2, such is its crushing difficulty at times.

There are a boatload of other new features, including new enemies (the thin man’s true form is simply terrifying), new abilities (heal your allies from across the map with a robot? Sure!), new soldier types (Psi-Ops dudes are pretty crazy) and new facilities to build, but honestly, it’s hard to go into too much depth on any one of these as there’s simply too much to write about. Put simply though, it’s a whole lot more XCOM for your money, with each cog having a very deliberate and well thought out place in the machine. Of course, as mentioned above, you can still name your characters whatever you want, but this time round the customisation has been massively extended.

It wouldn’t be XCOM, however, without a few technical problems. There have been points during my run where the game has juddered to a horrendously slow pace, with audio and video stuttering seemingly par for the course. However, this hasn’t dented my enjoyment of the game one iota, although it does make me hope that a patch is coming shortly to rectify some of the problems.

If you’re going to pick up XCOM 2 having never touched Enemy Unknown, then beware. It’s not the happy-go-lucky strategy experience many games will offer, in fact I’d probably say this is the video game equivalent to S&M. It is brutal. It will raise you to the peak of mental ecstasy before your attempt at humanity’s redemption comes crashing down around you in only a few turns, your squad returning to HQ a crippled, shambling mess, if they do indeed return at all. XCOM 2 will make you its bitch. And the best thing about it? It’ll make you want to come back for more. And you’ll love it.