When it comes to sci-fi, side-scrolling, shooter and action-adventure platformers, you may agree with me that no series sets the stage so well as the Metroid series. It leaves quite an impact and of course has countless fans across the world. Xeodrifter is a product spawned from one such fan, Renegade Kid who clearly portrays the effect it had on him in every nook and cranny. Does it leave just as good an impression? Read on to find out!

Xeodrifter is a 2D, side-scrolling, action-adventure platformer in true Metroidvania style, originally released on the Nintendo 3DS. As you boot up the game you are instantly hit with that SNES vibe. The overall art style features simple 8/16-bit graphics, a style which has seen a tremendous resurgence in recent years. Thanks to today’s technology however, we can enjoy these nostalgic pixels in high definition! The colour palette has even mimicked the SNES system, ranging from vivid pinks and purples to grimey blues and yellows that still allow the environments to pop out. The environments themselves are few and simple but each distinctive, however most enemies are sadly lacking in variety and are often reused. There are howbeit some distinctive characters. One enemy in particular (a large square block with one eye) seems to have a rather ghastly infection that on sight makes you feel the need to disinfect your eyeballs… That exception aside, despite the grimey palette the graphics are characteristic, easy one the eye and our little sprite is quite the adorable mass of 24 pixels. I cant help but feel the need to protect him and spur him on!

A classic SNES era inspired game would be nothing without the right soundtrack. Recent pixelated releases have included some fantastic chiptune OST’s and Xeodrifter adds another contender to that list. A majority of the tracks lend themselves to a more casual, easy going adventure as you seek to find the right path in these alien lands. This soon changes once you encounter a boss as the tone changes to a more upbeat, heightened pace that brings forth that dire sense of urgency. Of course there is also a very distinctive tune you will soon become accustomed to that alerts you to your often sudden demise, something that will long be ringing in your ears.

So onto the main game itself. You are a sprightly astronaut going about your journey in space when suddenly you collide with a rather swift incoming asteroid. The impact sends you somersaulting uncontrollably into space where you soon land in the midst of four planets. With your warp system in danger it quickly shatters, leaving you no choice but to scout the surrounding worlds for a new core.

Xeodrifter is great in that it provides you with complete control on how you approach and carry out your journey. All four planets can be visited in any order and there are no right or wrong decisions. The controls here are basic, utilising only the d-pad, analog stick and buttons making memorising actions easy. This is particularly handy in combat and exploration, where quick reflexes are often required to dodge various obstacles and enemy attacks. That being said, there were a few occasions where I met an untimely death due to the wrong action being performed without my meaning so. Upon entering these new worlds via a teleportation platform, you will need to traverse these uncharted lands with no clear sense of direction. The map can only be unveiled by exploring your surroundings. This is only a minor annoyance but the map can only be viewed by accessing the menu, with no mini map in the corner to easily guide you. When it comes to backtracking, having to stop every few steps to check you are going the right way can slowly become a hassle. With no clue as to whether the direction you are pursuing is leading you closer to your goal, this is where the typical Metroidvania style comes into play. The strategically planned levels encourage you to experiment and explore everything that catches your interest. Do you jump across the water safely and stick to dry land, or do you brave it and explore the murky, watery depths? Just follow your heart! Once you have set your heart on a route you may soon hit a dead end. You may have decided to take the plunge only to find that any struggle to dive is futile. So now what?

Not only may you be blocked by water but also by bubbling, pink pools of lava, an unreachable platform far off in the distance or an unbreakable gate. Yes, your quest will be hampered by such obstacles until you acquire the necessary abilities. These often indicate the correct way to go forward but force you to retrace your steps and revisit them later on. So how do I progress you may wonder? This is where boss battles come in. Each world offers a boss (some weird flying bug, thing… hey it’s an alien!) that you must defeat in order to gain new abilities that allow you to move on. Some of these abilities include a Submarine to dive below the surface or the Plane Shift ability allowing you to switch between the foreground and background at available platforms. Each new ability will allow you to progress past areas previously blocked, allowing you to continue mapping out each world. This of course means there will be much back and fourth in order to uncover that vital warp core!

The boss battles are sadly insubstantial, with little variety or challenge to put up a good fight. The first time you encounter this boss is of course a challenge as you try to figure out a good tactic after gauging its abilities, however once you have this first fight down, subsequent encounters offer no greater threat. That isn’t to say there is no difference (though they mostly look the same), sure their colour may change and add one new trick or two but I often found the same tactic could be applied to them all, leading to a relatively easy victory. On a more positive note, they still move pretty fast and you will need your quick reflexes otherwise you will wind up dead in the blink of an eye should you lack speed, concentration or find your sprite not doing what you meant to. 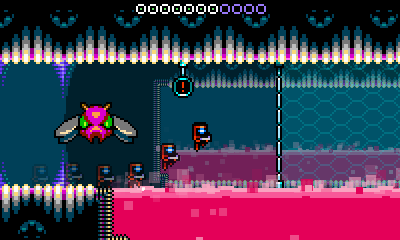 There is little in the way of character customisation in Xeodrifter. A few types of items can be collected as you traverse the alien lands and not all will be in plain sight. If you have a hunch that something may be lurking around then always act on it as you never know what may be hidden behind those walls. The first collectables you can find are health blocks, which of course boost your health bar and also replenish any that has depleted. Getting these ASAP is a great idea as sadly another downfall of the game is its lack of checkpoints and save locations. Checkpoints are only encountered before and after a boss fight and the only other way to save is to retrace your steps back to the teleoprter and enter your ship. Should you perish before, then all your progress will sadly be lost. The last collectible you can find, a gun block upgrades your gun capacity only, there are no other weapons to switch to. These upgrades however can be applied in various ways. Your bullets can be made more rapid, larger to increase damage output or create wavy lines or spray out in order to gain more reach. This may seem a tad insignificant but it allows you to customise your weapon to suit your personal style and tactics, giving you and edge. There are also three slots for you to programme your weapon presets which can change at any time.

If you start off with low expectations for this game then you will not be disappointed. The art style and music is very retro, bringing you a great sense of nostalgia but this is sadly short lived. Pleasing aesthetics aside, my total playthrough only lasted around 4-6 hours with only a few breaks in-between gameplay, something that the the lack of save points did not help. It is a lovely little game to distract yourself with for a few hours of casual play but once you have regained that warp core it is done and dusted. There was a part of me that was sad to see my cute pixelated friend warp into the far reaches of space. There are trophies to collect for you completionists out there to replay for and not all upgrades and sections of the map will be found first time round, unless of course you dedicate your time to total exploration. There is even a trophy for completing the game in under one hour! These really are the only things worth replaying for if you can stand the repetitive battles. Overall, despite the flaws, it was fun while it lasted and I would recommend it if your looking for a short platformer to kill some time with.